Advisors Living, the residential sales platform associated with Boston Realty Advisors, the largest independent real estate brokerage based in Boston, has sold all of the residences of The Mezz, 42 new units in a luxury building incorporating the historic West Broadway Theater in the heart of South Boston.

The former theater building at 420 West Broadway that was an entertainment centerpiece for generations of South Boston residents is now The Mezz. It is home to 42 families and individuals enjoying spacious modern living in the restored structure paired with a new six-floor wing with studios and one- and two-bedroom units.

“The Advisors Living team congratulates the new owners of homes at The Mezz on their purchases and the creative developers for preserving and revisioning a colorful part of the neighborhood, and designing such desirable 21st century living spaces,” said Janice Dumont, Chief Executive Officer of Advisors Living.

The Broadway Theater opened in 1920 and was designed by architects Clarence H. Blackall, Clapp and Whittemore, according to Wikipedia. Following a fire, it was rebuilt to the designs of architect Clarence Kivett in 1938. Originally a vaudeville house, it later became a movie theater.

The last residential unit of The Mezz, developed by Boston Property Development of Quincy, closed this month. The new design for the historic portion and the additional new construction was created by RODE Architects Inc. of Boston.

“The Mezz is immersed in the vibrant pace and pulse of South Boston’s most desirable neighborhood,” said Brad Braunstein, New Development Residential Advisor at Advisors Living. “The Mezz is an exclusive collection of modern condominium residences, and the new owners are experiencing a new kind of urban chic in a historic building.”

The new residents at The Mezz are a mix of young professionals, first-time home buyers, those downsizing from the suburbs, and investors in a second home.

Residences in The Mezz sold ranging from $500,000 to $1.2 million, for an average overall price of $800,000, or more than $1,000 per square foot, one of the highest in South Boston. The units are of contemporary design with high-end finishes, bathed in natural light and offering striking city views.

The former theater’s lobby space has been sensitively restored as commercial space, retaining decorative detail. Residential units are on floors 2 through 6, and many have balconies. The building features a two-tier rooftop indoor-outdoor patio, an inviting club room with kitchenette, a billiard room and underground parking as well as bicycle storage.

The Mezz is steps away from some of South Boston popular dining and gathering spots, including Loco Taqueria and Oyster Bar, Capo Restaurant and Supper Club, Fox and The Knife, and the Lincoln Tavern. Yoga and fitness studios are nearby, as well as South Boston’s active farmer’s market.

Within walking distance of The Mezz are Whole Foods, Foodies Market, Stop and Shop, Trader Joes and CVS. It is a 14-minute walk or short bus ride to the Broadway MBTA Station.

Advisors Living last year completed the sales of the luxury condominiums at record per-square-foot prices at Pier 4 in the Seaport District of South Boston, all 106 units selling at an average price of $3.5 million. The Pier 4 sales for the first time pushed 2021 per-square-foot prices substantially past those of Boston’s Back Bay and Beacon Hill, historical leaders in residential sales in Boston.

Boston Realty Advisors and Advisors Living continues in the market with some of the premium developments in New England, including 100 Shawmut in the South End, The Mark in East Boston, and Stratus Residences in Brighton, as well as The Village at Bailey’s Pond in Amesbury, Millwood Preserve in Framingham, and Terrazza in Wellesley. 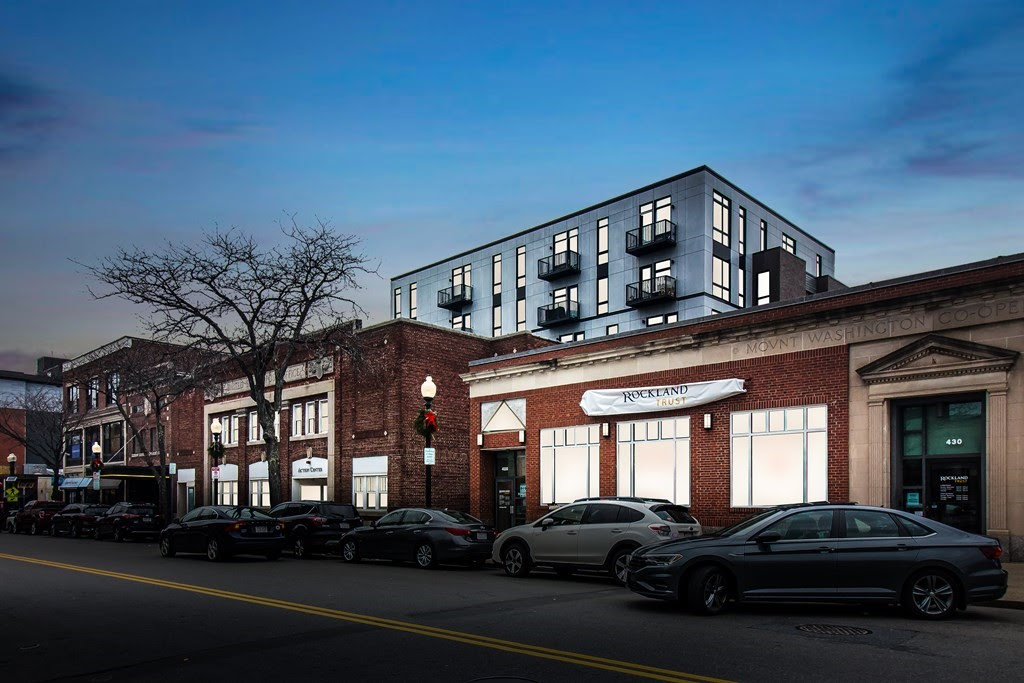 The Mezz in Boston

The Mezz in Boston