The Grand meshes glamour, sophistication and high energy, featuring an expansive dance floor, an open glass staircase, custom marble tables, hand-blown glass chandeliers and a 70-foot LED wall. The club will provide a full VIP experience, with stadium VIP bottle seating and VIP bars. The Grand will operate Friday, Saturday and Sunday nights from 10 PM to 2 AM, and will be available for events all week long. Scorpion Bar will be a unique blend of a traditional Mexican tequila cantina and a rock bar, with a Mexican-inspired food and cocktail menu including over 100 tequilas and scorpion dancing. The venue will be open daily from 12 PM to 10 PM, with the bar open Sunday to Wednesday from 12 PM to 12 AM and Thursday to Saturday from 12 PM to 2 AM.

Big Night Entertainment Group, proponent of The Grand and Scorpion Bar, also owns and operates nightlife venue Empire Restaurant & Lounge across from The Benjamin on the ground floor of One Marina Park Drive, and will open a new venue in the first phase of The Hub on Causeway in Bulfinch Triangle, which is on schedule for completion in late 2018. The Grand and Scorpion Bar help fill the void left in Boston’s club scene by the closing of Big Night Entertainment Group’s The Estate, a mega-nightclub located in the Theater District, in 2015. Other retail now open at The Benjamin and its’ sister building VIA’s 250,000 square feet of retail includes fitness center Equinox, Seaport Barbers and men’s clothing store Bonobos. A third nightlife venue, Kings Dining & Entertainment, will open on the ground floor of VIA this coming Monday, October 30th. The two buildings feature a total of 832 luxury apartment residences. The following is a rendering of The Grand and Scorpion Bar at The Benjamin: 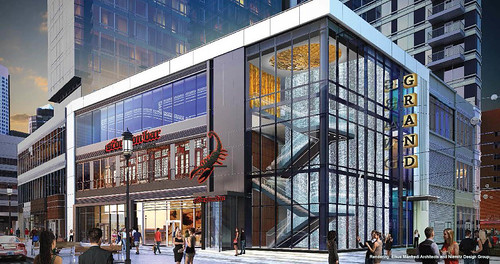