Höweler + Yoon and Sasaki today announced the groundbreaking for the 212 Stuart Street residential tower located in the historic Bay Village neighborhood in downtown Boston. The project was carried through the permitting process by Boston-based Transom Real Estate and is currently being developed by Greystar Real Estate Partners. The project received approval from the BPDA in summer 2017 and by the Boston Landmarks Commission in late 2018. The building will be developed on a 7,714 square-foot parcel located within Boston's “High-Spine”.

Sasaki served as the Project Architect in collaboration with Höweler + Yoon as the Design Architect. The project will include the construction of a 150,000 square-foot 19-story building containing 126 units with two townhouses and retail space on the ground level.

“The design of 212 Stuart Street is rooted in the idea that the tall building operates at multiple scales in the city,” says Eric Höweler, Principal of Höweler + Yoon. “When viewed from a distance, the building meets the sky with a distinctive silhouette and participates in the composition of the city's skyline. When experienced from the sidewalk, the building meets the ground and activates the streetscape in its immediate context.”

The site of 212 Stuart Street is currently a vacant parking lot between the Bay Village Neighborhood, and the Stuart Street corridor. “Context, here, is everything,” says Sasaki principal Victor Vizgaitis, AIA. “The entire genesis of the project came from looking for a way to moderate between two markedly different areas of the city.” The narrow building presents two distinct faces that each acknowledge the surrounding neighborhoods: the low rise residential neighborhood to the south, and the mixed fabric of the "High Spine" corridor to the north.

The building massing is broken up into a ‘coursed block,’ organized into discrete blocks of 3, 4, 5, and 6 story packages. The exterior is articulated to emphasize the vertical grain of the building with irregularly spaced opaque panels, alternating with recessed glass infill panels. The vertical panels consist of custom, multi-story precast panels with a concave, scalloped geometry.

“Considering the explicit historical concern in the neighborhood, we studied fluted geometries as a way to express depth and texture on the facade. Fluted columns themselves were constructed by stacking individual sections around a central core,” says Höweler. “This part-to-whole relationship satisfies the drive to maintain historical character, and yet the results are surprisingly contemporary.”

The heavy relief texture of the facade will create a unique optical effect, as well as some self- shading on the eastern and western exposures. Glazing for the residential units takes the form of a multi-story, recessed window wall with spandrel glass between the precast panels.

The penthouse floor is a single-loaded organization with an outdoor amenity deck to the south. The ground floor contains the lobby and retail spaces with storefront glazing facing the northern, more commercial side of Stuart Street. The southern portion of the ground floor consists of two walk-up townhouses accessible directly from Shawmut Street. These ‘new neighbors’ respond directly to the existing townhomes across the street and maintain an active residential frontage.

“Townhouses change the character of a tall residential building,” says Vizgaitis. “Particularly when they are well-detailed at their public face and set into a landscape that meshes with the city fabric, the building transforms from anonymous and controlled to something that feels personal and part of the neighborhood.” 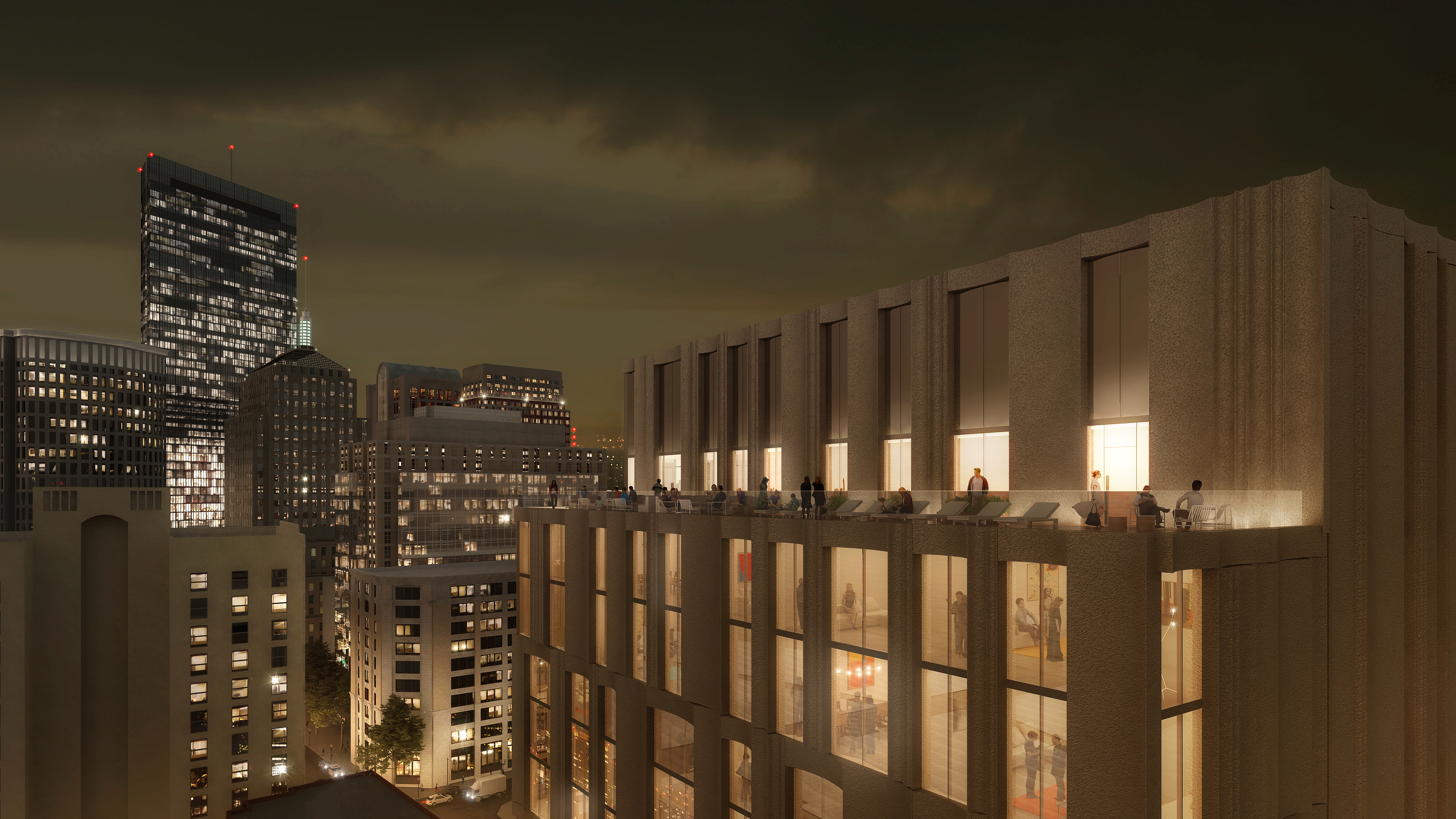