Skanska has announced it will construct a new interactive pedestrian museum at Harbor Way, the 20,000-square-foot, 70-foot-wide pedestrian promenade between its’ recently-completed 101 Seaport and under-construction 121 Seaport office and retail developments, honoring the history of the area’s development. The museum will focus upon Skanska’s discovery of an old shipwreck below the 121 Seaport construction site in May 2016, highlighting the landmaking of the Seaport District that caused the ship to be found a few blocks inland from Boston Harbor. The museum will explain how the Seaport District was once a tidal flat, which was filled with land in 1896, burying the old shipwreck. The museum will include facts about the ship’s last journey from Rockland, Maine and artifacts found within the ship, as well as the Seaport District’s initial use as a vast rail yard. "Boston has so many underground secrets and mysteries yet to be discovered. The shipwreck was both a surprise and an eye-opening experience and sheds new light on both the history of Boston's Seaport, and the historic connections between Boston and the rest of New England,” said Joe Bagley, the City of Boston’s Archaeologist.

Skanska’s new museum will be linked to an augmented reality exhibit that will sync to a smartphone application available for download, which will provide a more detailed, virtually guided tour through the museum. Reclaimed wood from the old shipwreck will also be incorporated into 121 Seaport; unique pieces of furniture will be created using the ship’s remnants and will accent the building’s common areas and conference rooms. “The buildings we create should positively impact the community beyond the confines of their own walls. Many of Boston’s neighborhoods preserve the city’s past in compelling ways. With Harbor Way, we are introducing the Seaport’s story in a way that marries Boston’s reverence for preserving history with the Innovation District’s spirit,” said Charley Leatherbee, leader of Skanska’s development operations in Boston. The following is a rendering of the interactive museum: 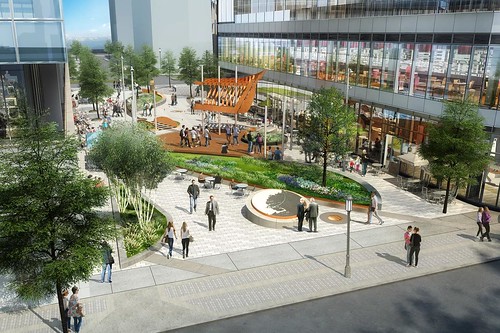 121 Seaport is nearly fully glassed in, with the 17-story building’s high-performance glass curtain wall installed as high as the 16th floor. Inside the building, concrete pouring and fireproofing spraying are complete on all levels. 121 Seaport will open in 2018, with office and retail space now available for lease. The building will contain 400,000 square feet of Class A office space on upper levels, with 50,000 square feet of retail space at the two-story podium at the base of the building. 121 Seaport will be built to LEED Platinum energy-efficiency standards; a private rooftop terrace will provide stunning views of Boston’s skyline and harbor. The following are photographs of 121 Seaport: 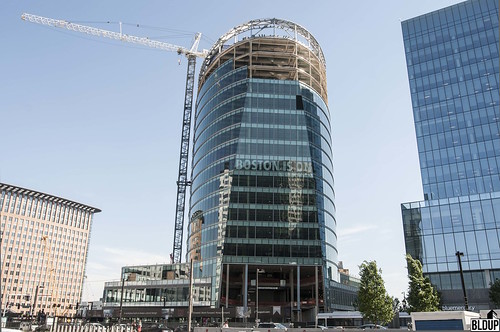