MARCUS PARTNERS CELEBRATES LAUNCH OF CONSTRUCTION OF THE FOUNDRY AT DRYDOCK

Marcus Partners, a real estate investment, management and development firm, celebrated the launch of construction of the Foundry at Drydock in the Raymond L. Flynn Marine Park (RLFMP) in the South Boston Waterfront neighborhood alongside Gov. Charlie Baker, Lt. Gov. Karyn Polito, Secretary of Housing and Economic Development Mike Kennealy, City of Boston Chief of Economic Opportunity and Inclusion Segun Idowu, the BPDA's Deputy Chief of Development and Transformation Devin Quirk, Barry Canton, Co-Founder and Chief Technology Officer of the building’s full user Ginkgo Bioworks, and a wide array of community partners. Foundry at Drydock’s project team also announced a significant community commitment to help fund the Boston area and greater New England expansion of the nonprofit BioBus. Aboard BioBus mobile laboratories and in community labs, K-12 and college students who have traditionally been underrepresented in the scientific community work alongside scientists on hands-on experiments and kick-off a lifetime of science engagement.

“Here in Massachusetts, we have seen incredible growth in the real estate pipeline to meet the demand of biotechnology companies choosing to launch and scale across Massachusetts,” said Governor Charlie Baker. “We are grateful to Ginkgo Bioworks and Marcus Partners for their continued commitment to the Commonwealth and look forward to the opportunities this transformational project will bring to the area.” 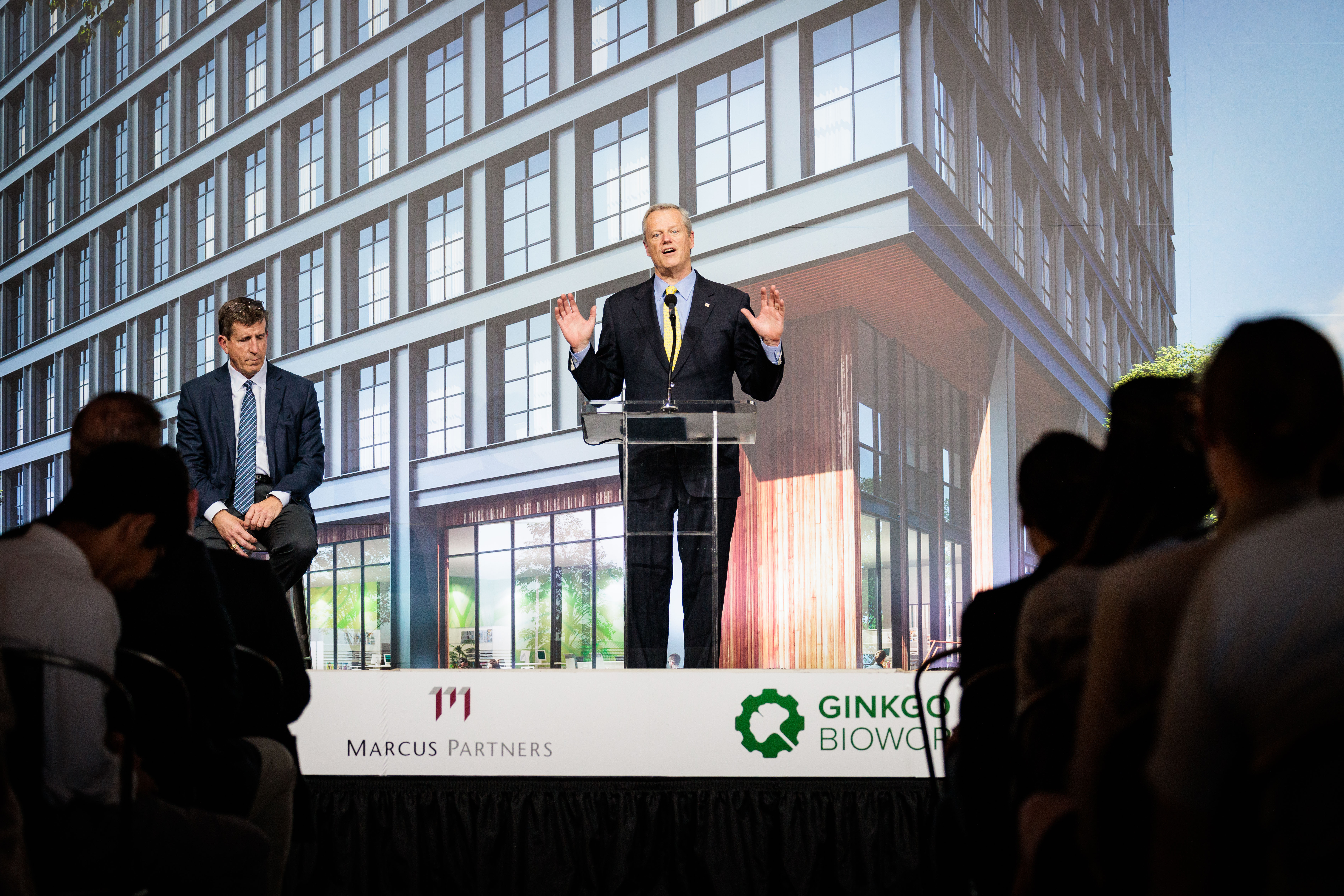 “The Foundry at Drydock is the realization of opportunity to leverage BPDA-owned land to continue to financially support Boston's maritime industry, grow a very successful Boston born business in Ginkgo Bioworks, and implement the vision of the Raymond L. Flynn Marine Park Master Plan including investments in climate resiliency measures and educational opportunities that will help diversify the growing life sciences sector,” said Devin Quirk, Deputy Chief of Development and Transformation, Boston Planning and Development Agency.

The new building design is a modern interpretation of the district’s industrial vernacular, aiming to celebrate the RLFMP’s industrial ecosystem while offering a forward-looking expression. The adaptive reuse of the existing steel manufacturing building works to further enhance the industrial character of the neighborhood.

“While the design of Foundry at Drydock reflects the industrial heritage of the Raymond L. Flynn Marine Park, this is really the first building in a new generation of assets,” said Marcus Partners Principal, Director of Development Levi Reilly. “Foundry at Drydock has a combination of next-generation technologies that reduce fossil fuel consumption by 93%. It’s also the first building to join the City of Boston’s Climate Resiliency Infrastructure Fund, a private sector pool of capital for the City to build critical infrastructure in the fight against climate change.”

Ginkgo Bioworks (NYSE: DNA), the leading horizontal platform for cell programming, will fully occupy the new 262,000SF life science campus which includes a new, state-of-the-art life science building and an adaptive reuse of a single-story industrial building that will serve as the gathering space and cultural hub for the project.

“We expect this expansion will provide us with the important capacity we need as we serve our growing ecosystem of developers using biology to address the world’s most pressing challenges,” said Barry Canton, Co-Founder and Chief Technology Officer of Ginkgo Bioworks. “The cutting-edge technology deployed in the Foundry enables the groundbreaking and meaningful work our teams are carrying out each day to innovate industries as diverse as pharmaceuticals, agriculture, food, materials and more. We’re incredibly excited to grow the platform and our presence in Boston, a city with a booming bioeconomy that our entire community can benefit from.”

BioBus helps K-12 and college students discover, explore, and pursue science and focuses on students excluded from the scientific community due to factors such as race, gender, economic status, and physical access. BioBus students connect with scientists from diverse backgrounds, learn lab and research skills, practice science communication, and take steps to become the next generation of scientists and problem-solvers, making the world better for all. BioBus community scientists have studied science fields in undergraduate and graduate school, conducted their own research, and are intimately aware of the many barriers to the science careers that students still face today.

“As part of our engagement with the community, the entire team for Foundry at Drydock is focusing its efforts to launch this campaign to help bring BioBus to Boston,” said Marcus Partners COO and Head of Capital Patrick Sousa. “While the sciences are a significant contributor to our economy and a big part of our development program in the South Boston Waterfront, we also want to ensure all kids, particularly those from underrepresented groups, are exposed to STEM careers and opportunities.”

Foundry at Drydock, located on Boston Planning & Development Agency (BPDA) property in the RLFMP, is the first development project to commit to the City’s Climate Resiliency Infrastructure Fund, which will provide financial support to mitigate the impacts of sea level rise and impacts of climate change for all tenants within the RLFMP. Additionally, this project has been designed to meet LEED Gold certification standards, the City of Boston’s Net Zero Carbon Standards, and will aim to achieve a reduction of 40% in carbon emissions and 93% in fossil fuel consumption as compared to the current Stretch Energy Code.

The project’s design is being led by SGA, one of the country’s leading life science design firms, in a joint venture partnership with DREAM Collaborative, an emerging BIPOC-owned architecture firm. In addition, the construction of the project is being managed by John Moriarty & Associates in a partnership with Maven Construction, an emerging BIPOC women-owned and Boston-based construction management firm. The project responds to the BPDA’s Diversity, Equity, and Inclusion requirements by including MBEs or WBEs in pre-development, construction, ownership, and ongoing operations. Marcus Partners also participates in the CREST program (Commercial Real Estate Success Training) which offers a paid summer internship to support commercial real estate and related companies in their commitment to attract underrepresented students of color and women to the industry. 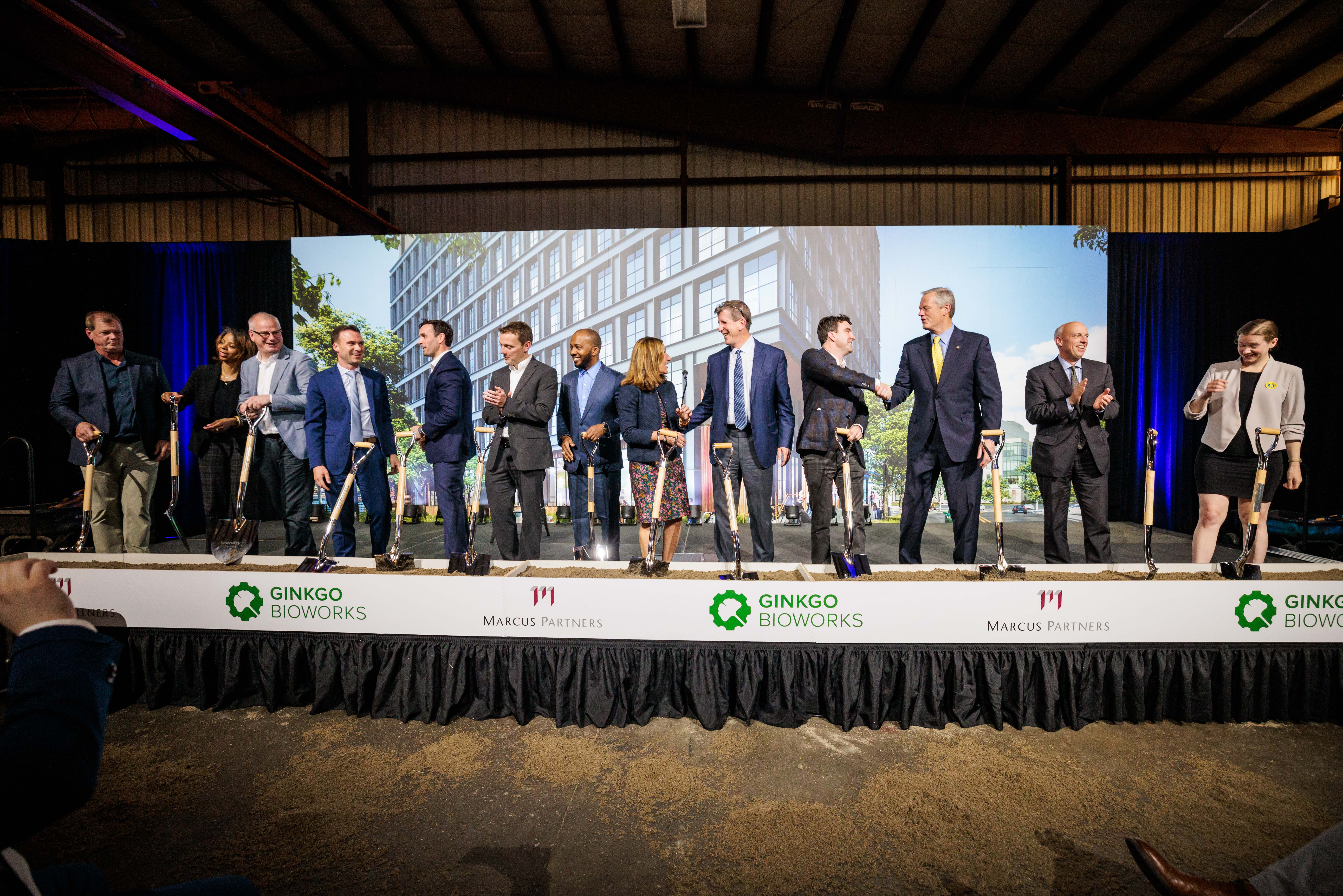 Foundry at Drydock in Boston

Foundry at Drydock in Boston