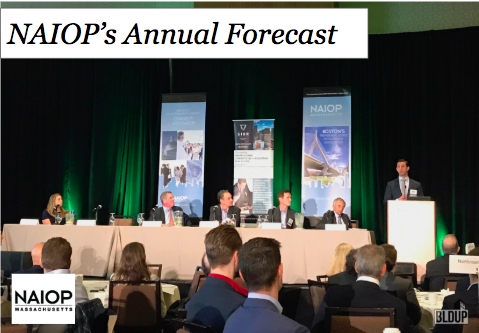 The question on everyone’s mind as another positive year draws to a close is: How long will this boom last??  Our friends at NAIOP put together an all-star panel to provide insight on the current market and predictions for 2019.  The overall sentiment was very positive for the coming year in Boston and the suburbs. The high demand for space (5:1 for office & 11:1 for lab) in Cambridge is driving rents up and also pushing companies into downtown Boston or the suburbs. In the industrial market, vacancy is at a historic low, however, functionality continues to be key outside of the city with the growth of e-commerce. Each presenter provided key metrics that demonstrated the strength of the market currently and into 2019.

To kick the event off Doug Poutasse of Bentall Kennedy, an expert on economic analysis and forecasting, provided his thoughts on the market at a national level. As an economist Poutasse said he is “always pessimistic” but he does feel 2019 will be a solid year, while not as strong as 2018. Throughout the past year vacancy rates were low, with a historical low on the industrial front. As everyone knows construction inflation is high, at 6.5% far ahead of the national average of 2%.  Poutasse did also want to point out he is predicting 2020 will be a tough year. “Lookout for 2020” he stated.

Roth is predicting a strong year for the Boston Suburbs in 2019 with expected rents to hit $40 in Burlington and Westwood.  As Roth pointed out it’s a new era for suburban lab space with a diverse mix of tenants, from tech startups to robotics firms bringing diversity to the tenant base. The recent sale of The Linx in Watertown at $852/sf provides an example of how an asset can be repositioned for positive gain. Roth also expects rents to continue to increase; however, new lab requirements for startups will drive owners to consider larger TI’s and or shorter lease terms.

Lab and office space inventory is at such a low point in Cambridge, Bekarian calls the current conditions a “crisis for tenants”. In East Cambridge office and lab vacancy rates for 2018 are below 1%. Many projects, like 145 Broadway & 399 Binney Street, in the pipeline, are already pre-leased as well further limiting the availability.  Because of these factors, developers are looking at repositioning existing product like parking garages or the 3rd floor revamp coming to the CambridgeSide Galleria. The tight market is also driving companies out of Cambridge to downtown Boston or the suburbs.

In downtown Boston, much of the product in the pipeline is also already spoken for. The question then remains which developers will move forward with projects on spec, such as Skanska is doing with Two Drydock. The other major trend everyone has their eye on is coworking space. WeWork now leases over 1 Million SF in Boston with their new concept HQ just kicking off. Cuddy also pointed out the importance of amenities and design in helping companies attract and keep top talent.

The Boston industrial market is now on the 8th year of positive absorption and vacancy rates at 6% are at a historical low (average is typically between 12-14%). As Rodenstein noted demand to be in Boston is resulting in increased rents while outside of 495 functionality is most important. With the rise in e-commerce, more loading docks are key. Typical warehouse space in the past would require 1 dock per 10Ksf but now 1 dock for every 6K sf or less is needed. As vacancy is much lower than in the past, even if the market softens slightly industrial will still be in good shape.

Lagosh was also positive in her outlook of the capital markets in the Boston area as many of the trends that investors want are available here.  These include Boston/Cambridge as growth markets, trophy properties with credits, core with a story, and niche sectors like life science or student housing.  Lagosh predicts that values will hold in core markets for 2019 as relative value becomes important than ever before. She also expects Premier Innovation Centers to be a new trend of importance within the capital market sector.

Based on these forecasts the boom won’t bust in 2019 and NAIOP will continue to work with their 1650+ members through advocacy and education to ensure they are able to take advantage of this strong market.  For more information on NAIOP MA visit their website at http://www.naiopma.org.