Landing 53 is located on a two-acre lot next to the Weymouth Landing-East Braintree MBTA Commuter Rail station with transit service to Downtown Boston. 198 vehicle parking spaces are located on site in an underground garage. The following are renderings of Landing 53: 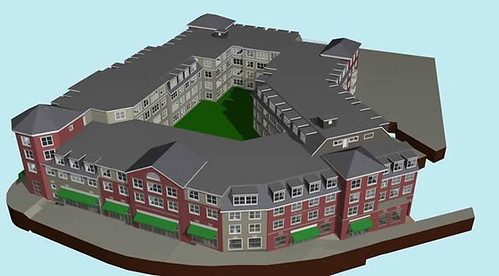 
Dellbrook | JKS has completed construction of Landing 53, a 172-unit luxury apartment community located in the heart of Downtown Braintree. The newly built $50 million building features 32 studio, 62 one-bedroom, and 78 two-bedroom apartments, with 12,000 square feet of ground-floor retail. Resident amenities at Landing 53 include a modern lobby, a resident lounge, an outdoor pool and a state-of-the-art gym with yoga facilities. The building is built with five stories of wood framing above a post-tension concrete parking garage containing 198 vehicle parking spaces.


Apartments at Landing 53 are available for lease starting at $1,700/month for studios, $2,050/month for one-bedrooms and $2,450/month for two-bedrooms. Landing 53 is located next to the Weymouth Landing-East Braintree MBTA Commuter Rail station, a short commute to Downtown Boston. The following are photographs of Landing 53: 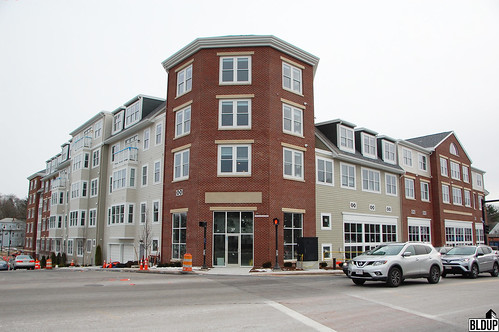 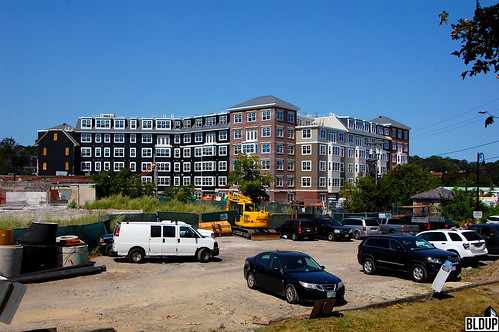 The $50 million Landing 53 mixed-use development in Downtown Braintree, built by Dellbrook | JKS, has topped off at six stories tall, and red brick and tan clapboard siding finishes have been installed along large sections of the building's wood frame. Just about all of Landing 53's windows have been installed. The development's tower crane has been dismantled following the frame's completion. Interior finishing of Landing 53's 172 luxury apartment residences and common amenity spaces, which will include an outdoor pool, a modern lobby, a state-of-the-art gym with yoga facilities and a resident lounge, is now underway. Leasing of residences will commence in Late 2017; Landing 53 will open in Early 2018 and will also include 12,000 square feet of ground-floor retail. The following are photographs of Landing 53: 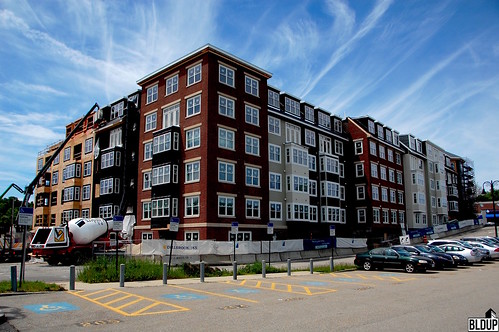 A tower crane has been installed at Landing 53, a $50 million mixed-use building being built by Dellbrook | JKS in Downtown Braintree. Landing 53’s five-story structural frame is rapidly rising. A large section of the building’s concrete base has been poured. Wood framing is being installed on Landing 53’s second floor. Leasing of space at Landing 53 is expected to commence in June 2017. The following are photographs of Landing 53: 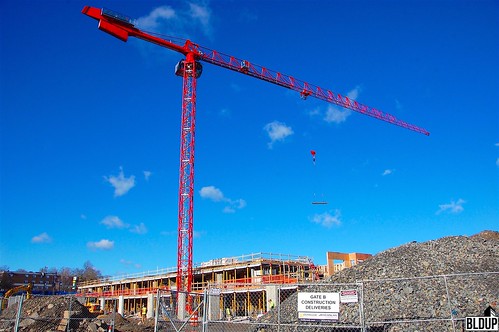 The Healthy Neighborhoods Equity Fund, a $30 million fund set up by the Massachusetts Housing investment Corporation (MHIC) and the Conservation Law Foundation (CLF) to finance mixed-use TOD projects in communities undergoing transformation, provided $5 million in equity gap financing for Landing 53. “From good jobs, to new pedestrian walkways, to better access to public transit and more, this development will electrify the neighborhood and provide a perceptible spark to Braintree’s economy and community,” said CLF President Bradley Campbell in an official press release.

Concrete pouring is underway at Landing 53 to construct the building's foundation. The following are photographs from the Landing 53 groundbreaking ceremony, courtesy Dellbrook JKS: 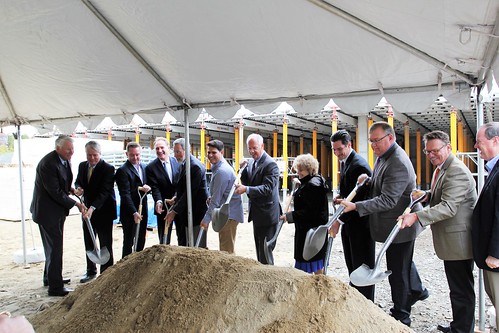 The following is a photograph of the Landing 53 construction site, courtesy The Patriot Ledger: 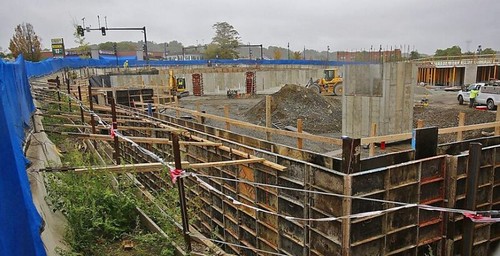 September 30, 2016 (BOSTON, MA) – A Braintree transit-oriented real estate development (TOD) with 172 new apartments and 12,000 square feet of retail space had an official groundbreaking ceremony today at the site, which is already under construction.

Landing 53 is located at the Quincy Avenue-Commercial Street intersection in Braintree, a short walk to the MBTA’s Weymouth Landing-East Braintree commuter rail station. Cambridge developer Joshua Katzen is building the $50 million, 5-story project on an underutilized 2-acre parcel, which he acquired and razed.

Landing 53 has been in the works for more than three years and has been a major priority for the town, which spent $2 million in state funds and some town money to improve the area with underground utility lines and improved street lighting. The property has been underutilized, with old, semi-vacant buildings. The new development will revive the neighborhood and spur economic growth consistent with the town’s stated mission of promoting sustainable development.

Braintree will also realize a significant increase in property taxes over time. Braintree officials say that already the town has realized about $1 million from the project from the sale of the municipal parking lot and from building and infrastructure permit fees.

The Healthy Neighborhoods Equity Fund – a $30 million fund set up by the Massachusetts Housing investment Corporation (MHIC) and the Conservation Law Foundation (CLF) to finance mixed-use TOD projects in communities undergoing transformation – provided $5 million in equity gap financing for the project. HNEF chose to invest in Landing 53 because the development met the screening criteria needed to qualify: It is conveniently located close to public transportation and it will add workforce housing, create jobs, enhance the environment with new pedestrian walkways and other amenities, and has the potential to improve the health of the community and its residents.

Opening the ceremony, Braintree Mayor Joseph Sullivan said, “This project will be transformational for Braintree. Because of investments on the public and now on the private side, we will see a vibrancy return to this part of town.”

Speaking at the event, MHIC president Joe Flatley said, “Cities and towns like Braintree and developers who want to build projects that will revitalize those communities face daunting challenges finding adequate financing. To get their projects done, they need to pull together all available public and private resources. Clearly, the town and developer did just that and we were pleased to invest HNEF funds in a project that we know will transform this community.”

The new building will consist of 93 one-bedroom apartments and 79 with two-bedroom units. All apartments will be market-rate, with rents targeted to workforce housing. The building’s ground floor will be split into 3-4 spaces for stores and restaurants with access to the East Braintree/Weymouth Landing Greenbush train station.

CLF president Bradley Campbell said, “Today, we saw the completion of a project three years in the making — a project that has transformed vacant property into a true center of housing and commerce. From good jobs, to new pedestrian walkways, to better access to public transit and more, this development will electrify the neighborhood and provide a perceptible spark to Braintree’s economy and community.”

PNC Bank is the permanent lender.

Dellbrook Construction is the contractor and Hugh Russell of Russell Scott Steedle & Associates is the architect.

Massachusetts Housing Investment Corporation is a leading private lender and investor specializing in innovative financing solutions for the development of healthy, sustainable communities. It was founded in 1990 by a consortium of banks and other corporate investors to fill a critical gap in meeting the credit needs of developers who could not get financing for certain projects from traditional lenders. MHIC now offers a variety of debt and equity products for affordable housing, community facilities, and commercial development, and is nationally known for its ability to craft unique financing structures and to see the most complex projects through to successful completion. In its 25 years of operation, MHIC has provided more than $2.4 billion in financing for the preservation or creation of more than 20,300 housing units and 4.5 million square feet of commercial space throughout New England.

Do you have a video of Landing 53. Contact us at info@bldup.com to implement your video and to find out options for creating this video