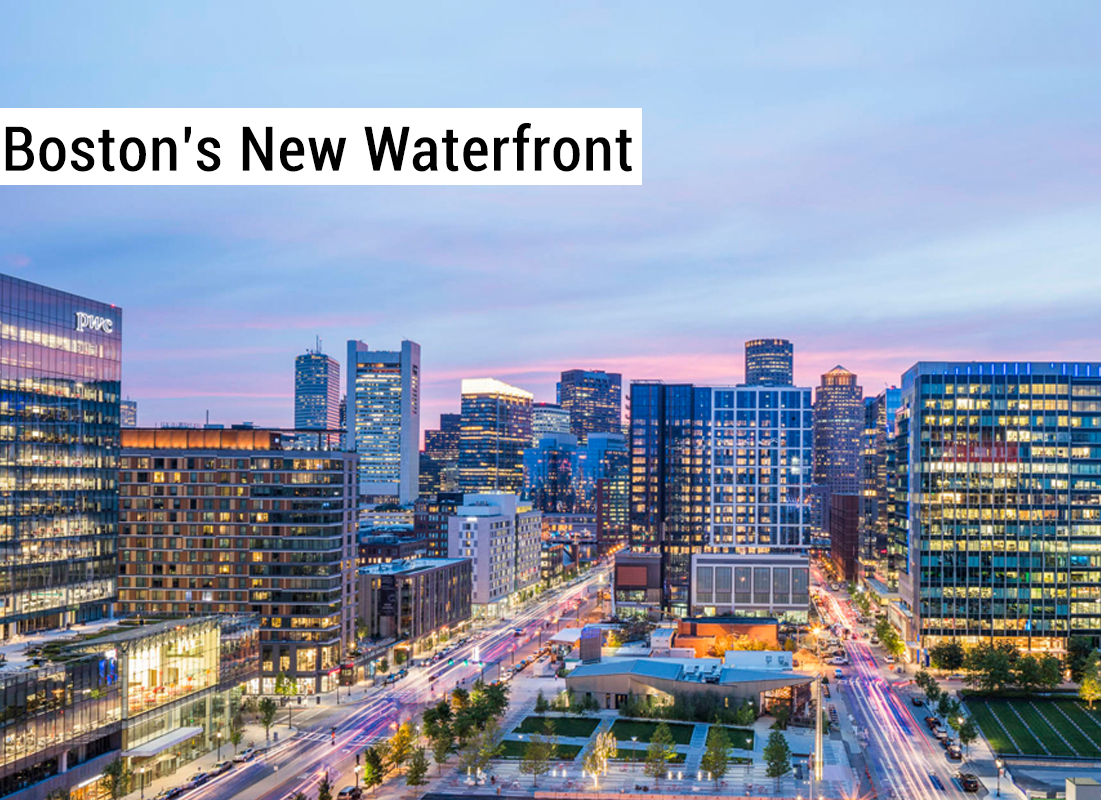 In early 2010, Mayor Menino launched a plan to transform 1,000 acres of underutilized land on the South Boston Waterfront into a live/work/play destination. The “Boston Waterfront Innovation District” aimed to attract and foster innovation within the city’s tech community. Nearly a decade later the neighborhood is unrecognizable and continues to grow with some of the largest projects just beginning to coming out of the ground.

In terms of sheer development volume, The Seaport is miles ahead of the rest of Boston. Between January 2014 and April 2019, 13.5 million square feet of development had been approved for the Seaport. The next closest neighborhood for development is Downtown Boston at 7.9M. Go just a few months without a visit to the Waterfront and you may not recognize the neighborhood when you return.

As the Seaport grows so does the population with an increase of 104% between 2000 and 2015. New condos like Twenty-Two LIberty and rental projects like The Benjamin & Via have opened to provide luxury housing options for these residents. The innovators Menino hoped to attract also came in droves. Commercial tenants like Vertex, GE, PwC, Reebok, and Amazon all have moved to the Seaport/Fort Point or will be arriving soon. Amenities in the neighborhood have also continued to improve with additions of a cinema, new restaurants, and craft beer destinations. The neighborhoods first grocery store is also in the works with Trader Joe’s showing interest in adding a location at Thompson Place in Fort Point.

With all of these changes, however, the neighborhood is far from complete, evident by the number of cranes spotted across the skyline. Several of the largest projects are under construction now including not just housing but additional office space (Amazon’s upcoming office on Seaport Square Block L4) and several hotels, the largest of which will be the  Omni Seaport Hotel with over 1,000 rooms, expected to open in 2021.

Upcoming major residential projects include EchelonSeaport, which will offer 717 luxury residences (a mix of apartments and condos) along with an open-air pedestrian friendly courtyard which will provide access across the neighborhood and bring additional retail and restaurants. Across the street from Echelon will be The St. Regis Residences, Boston, set to offer 114 luxurious condo residences. The 106 luxury condos at Pier 4 are also nearing completion. As these new luxury buildings come online the median condo pricing, already at $1,065,000 as of Q1 2019, will only climb. Another sign demand is also growing is the decrease in days on market down by 22% in Q1 YOY.

As part of the Seaport, The Fort Point neighborhood is also seeing dramatic change and high demand for space. Earlier this month, Related Beal acquired a parking lot along A Street for $218M.  Many historic buildings in this area are also being renovated into a first-class office or luxurious residential space. Projects like The Muse offer an interesting mix of history with modern amenities and allow for easy access to everything the Seaport has to offer.

One major concern that cannot be overlooked for the Seaport is the risks associated with rising sea levels. The Climate Ready Boston initiative aims to deal with this issue and many developers are incorporating measures into their new projects to be prepared for this eventuality.  As this neighborhood continues to grow and refine its identity the natural beauty of the waterfront combined with these luxurious modern homes and continually improving suite of restaurants, retail and open space, we don’t expect The Seaport to lose its status as Boston’s “hottest” neighborhood anytime soon.

With experience in all neighborhoods throughout the city of Boston, recent transactions have ranged from $200,000 to $10 million. They provide unparalleled market analyses, pricing strategies, and off-market information which their clients have come to appreciate.

Their unwavering commitment and determination to luxury service over the years have helped build their loyal client base and referrals network. The team’s access to information, particularly in the new development realm is second to none. For sellers, buyers, investors, and developers looking for the best possible advice and information, The Caulfield Properties Team add unmatched value to your consumer experience.

Feb 15, 2019
Compass released their Q4 Boston Market report and The Caulfield Propert...
Mar 25, 2019
Few neighborhoods in Boston have undergone the sweeping change seen in S...
Apr 18, 2019
Drenched in history and character, Beacon Hill is Boston’s most exclusiv...
Jun 18, 2019
With its ideal location along the waterfront so close to Downtown Boston...