There is a laundry list of reasons that an air rights project hasn’t been built in Boston since the Copley Place mall in 1984. Yet despite these typical hurdles, construction kicked off last year on Samuels & Associates Parcel 12 development. This project, designed by Elkus Manfredi, will include 450,000 square feet of commercial space, a portion already pre-leased to Car Gurus; 50,000 square feet of retail and restaurant space; and a 144,000 square foot hotel. But perhaps more importantly, the development will also repair a barren and often dangerous corner of our walkable city.

As with most complex projects, Parcel 12 has been years in the making with Samuels winning the rights from Mass DOT in 2013. Shortly thereafter, Feldman Surveyors was brought onto the project and began the complicated task of creating an existing conditions survey. This scope of work was not only to cover the surrounding streets and utilities, but also the Mass Pike as the development team would have to create a deck over this busy thoroughfare. These existing conditions surveys were then shared with other disciplines including owners and architects so they could begin design and permitting for the project. The Feldman team continued to remain heavily involved with the project through permitting which included extensive involvement with MassDOT, the controlling authority over the Pike. Similar to their work on another very complex project, the South Station Air Rights, Feldman also created unique air right plans for the development, carving out the portions of the air rights only needed for the project. 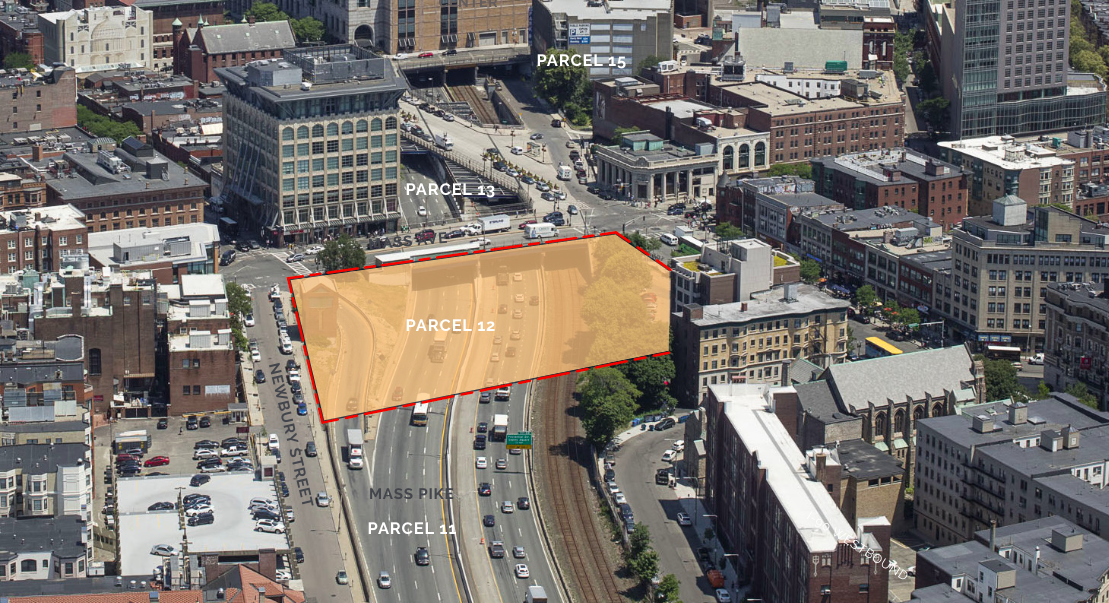 An aerial view of the Parcel 12 site, primarily located over the Mass Pike 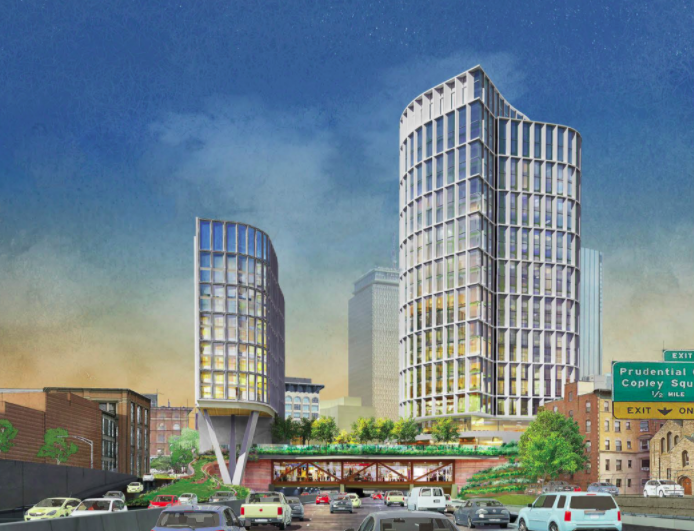 A rendering of the upcoming Parcel 12 project.

Once Suffolk was selected as the general contractor for the project they also hired Feldman for construction engineering and layout. The project kicked off over the summer with the team currently working on foundations with the Feldman crew providing control lines for the location of slurry walls. Given the location of the project, this process is more complicated than your typical new construction. Obviously, the team can’t just walk out onto the highway to complete their surveying, so nighttime lane closures had to be arranged. The Feldman crew also used their 3D scanning capabilities to be able to check areas where access is limited which is key to keeping things on track. Once the building begins to go vertical the Feldman team will remain onsite working on locations for the super structure, providing control lines for layout of interiors. Feldman’s continued work on the project also allows for the chance to bring Fraser Poly-Engineering Services, a minority-owned business (MBE), to the team. Kurt Fraser started the firm just a few years ago and has worked with Feldman on numerous projects. On Parcel 12, Kurt will be working alongside the Feldman crew to see what technical methods and techniques they are using to handle layout and construction engineering. Fraser currently specializes in traffic and civil engineering design along with surveying but is looking to expand his team’s capabilities. Working with the Feldman team provides Fraser with hands-on experience and bringing diversity to job site is also a key priority for Feldman.  When asked by BLDUP about this initiative, Michael Feldman said “Our partnership with Fraser is a great way for us to share our expertise with Kurt so he can grow his firm.  We know that Suffolk, Samuels, and Feldman are all committed to this effort. We also believe that it is extremely important to invest in and mentor smaller local businesses while on the job. Our P12 partnership story is what our City and State officials would like to see, and we are already employing this on a 2nd project outside of Boston.”

“We’re so pleased to be building on this unique parcel with such thoughtful partners like Feldman who share our commitment to DEI,” said Abe Menzin, Principal at Samuels & Associates and the project lead on Parcel 12. “Feldman’s team brings a level of passion to this project that really makes it feel like our vision is being achieved.”

While construction may still be in the early stages with work scheduled to last through 2023, it is clear this project will have a definite positive impact for the city. Despite the challenges the project team has faced in dealing with this complex site, the project will reconnect neighborhoods, provide safe connections along Mass. Ave that is one of the busiest transportation corridors in the city, reopen the Hynes Convention Center station tunnel and create a new half-acre publicly accessible plaza. Feldman added: “The team at Samuels and Associates is incredible at placemaking and building meaningful projects that utilize local talent and further enhance neighborhoods. I cannot wait to experience this project as a consumer when it is complete!”

At Feldman Surveyors, we guide our clients' development vision to become a built reality with smart solutions like Survey, BIM, and Construction Engineering. Our Boston and Worcester offices are staffed with over 70 professionals ready to meet your project's needs.

Right. From the Ground Up.

Sep 02, 2020
Few projects in Boston’s development and construction archives have the ...
Oct 01, 2020
Numerous studies have linked company culture to attracting and retaining...
Feb 23, 2021
As construction technology is rapidly changing so are client expectation...
Jan 20, 2019
Boston continues to experience its largest building boom in years. Accor...