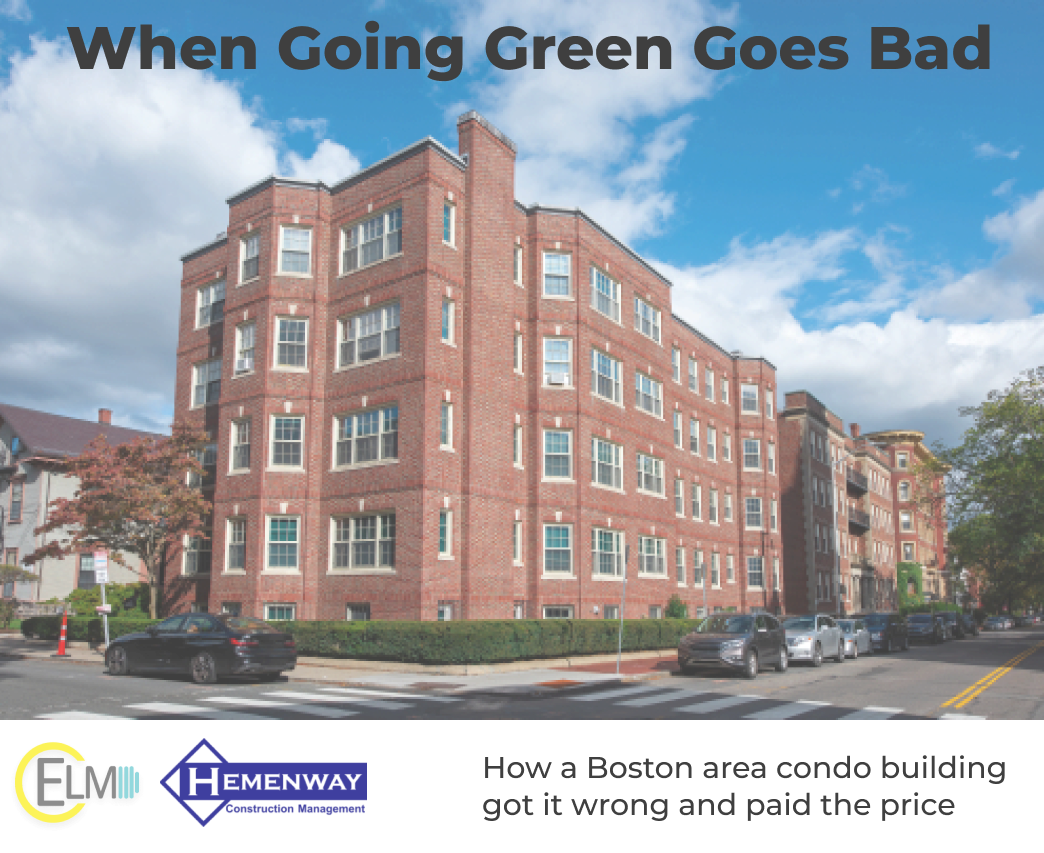 New BERDO guidelines are now in effect and the CRE community is still learning about the current and long-term compliance hurdles. Immediately, it’s very straightforward: all buildings over 20,000 square feet need to report their energy usage to the city through Energy Star Portfolio Manager. Long term, it is important to understand what the goal of BERDO and our society’s broader push towards “sustainability” truly is. Organizations, governments, and cities are mandating zero-energy or zero-carbon goals. How we reach these goals will be a combination of efficiency, electrification, and credits. Without the right team and plan in place, building owners will risk spending valuable capital resources on “solutions” that may fall short of the new requirements. Working with an Energy Design Professional and contractor on a holistic view of your building’s needs will help avoid pitfalls. 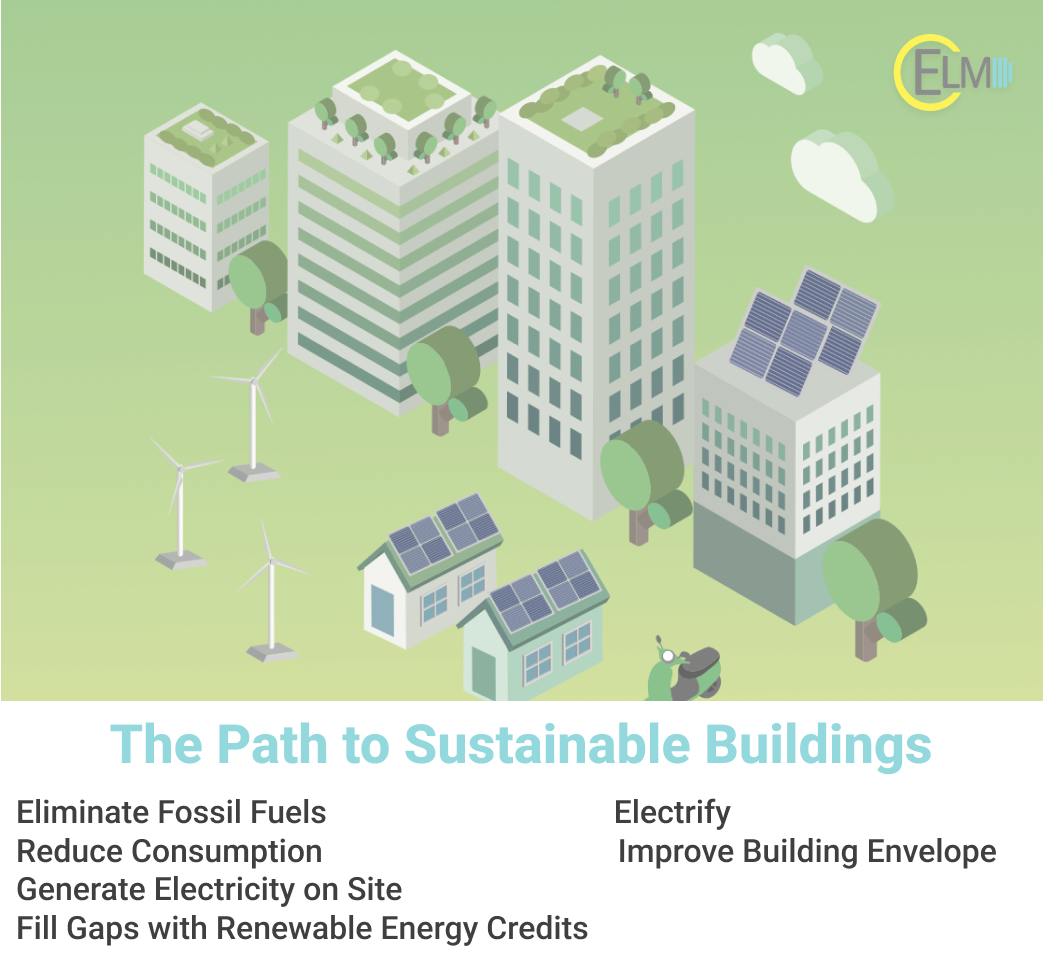 Let’s take a look at a cautionary tale involving a roughly 70-unit Boston area condo building where millions of dollars were spent on building upgrades that subsequently had to be redone. At this particular project, the condo association spent $1M to remove the existing steam heat piping and boilers and installed a low-cost heat pump solution in its place. This work was completed without an energy upgrade study done prior and after installation resident complaints began to pour in. Even with the new system running constantly, residents were still cold and facing exorbitant electric bills. Upon further review, the owners discovered that the heat pump system selected was not rated to be the sole heat source for New England winters and it could not keep up with heat loss through the building's leaking façade, on which repairs had been skipped in favor of new common area finishes.

With the heating issues pending and the DHW system proving inadequate, the building was at risk of being condemned. At this point, the condo association retained Hemenway Construction to replace heat, hot water, and re-pipe the interior for hydronic radiators at a cost of $2.25M. While new repairs eased many of the issues, they did not include facade work leaving units with significant air leaks causing drafts, discomfort and wasted energy. Hemenway Construction had proposed a well-planned, whole building solution from the beginning.

Instead of rushing ahead with a “quick and easy” solution, building leadership should have retained an experienced team in order to plan with the future in mind. Working with an energy professional & contractor they first should have performed an energy audit to develop a clear plan with drawings and specifications outlining construction costs, schedules and product limitations to the Association. In this particular case, a higher-end heat pump system rated to meet the demands of our New England winters (down to -13 deg F) could have been installed for $1.5M. A holistic approach would also have considered the importance of the facade upgrades which could have included the replacement of all glazing and repointing and sealing of the building's facade for $1.5M. This facade work has the added benefit of reducing the required heating load. Finally, new boilers & risers would also have been suggested providing backup heat and DHW for $300K. So for roughly the same cost, building residents could have had improved comfort, saved energy, and prepared the building to meet ever-tightening energy regulations. This total cost also does not reflect any incentives on the project that an energy professional would have maximized, further lowering the cost to the property. 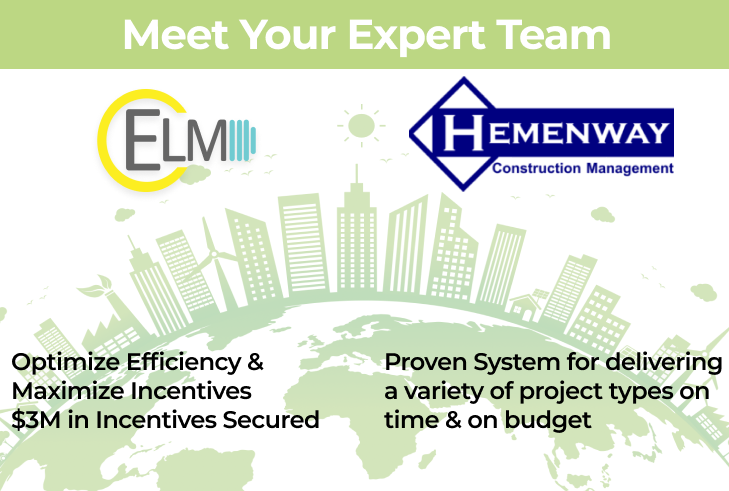 As building owners begin to think about long-term planning to meet new energy requirements, it will be key to ensure the right team is in place to avoid problems similar to those outlined above. Taking a comprehensive view of your building, setting clear goals, and outlining budget and implementation plans will be necessary steps in this process. With over 6,000 buildings in Boston currently required to meet new BERDO guidelines, there are likely going to be many missteps, but owners who look to the experts, like ELM Consulting & Hemenway Construction, will find long-term value unlocked while meeting new regulations.

ELM Consulting seeks to accelerate the adoption of energy efficiency best practices in the marketplace. We achieve this by combining decades of experience implementing energy efficiency projects with an intensive understanding of how to maximize all available utility incentives and tax credits. The result is that our clients are confident they are getting the highest value project every time.

Hemenway Construction Management has been developed as a new and up and coming general contracting and full-service construction management company for the 21st century. We strive to provide “back to basics” service with a modern sustainable platform. The combination of innovative research, cooperation with local, state, and federal organizations and programs, and willingness to stay on the cutting edge with the latest in software and integration, separates Hemenway from other companies in the industry.

Jan 24, 2022
The last two decades have seen an exponentially increasing interest in E...
Oct 14, 2021
Just a few years ago the concept of the Zero-Net Energy building was in ...
Dec 13, 2021
While there have been several false starts, the much-anticipated return ...
Jan 20, 2019
Boston continues to experience its largest building boom in years. Accor...