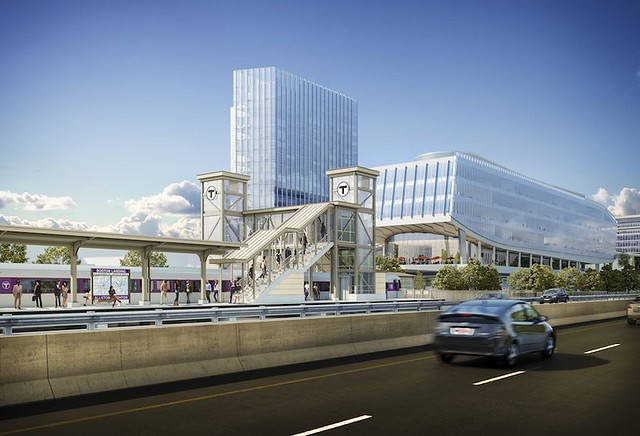 With a new commuter rail station set to open this morning, Boston Landing, a former vacant brownfield site located just outside of Downtown Boston, has become the next epicenter for transit-oriented development. The opening of the station will serve as the key connecting factor for the thriving, multi-phased 15.2-acre Boston Landing mixed-use development, built by NB Development Group and The HYM Investment Group, and the Brighton neighborhood at large, providing a direct rail link to Downtown Boston. New Balance, the Boston Celtics and the Boston Bruins are just a few of the influential organizations who have already become a part of Boston Landing, with many more sure to come. 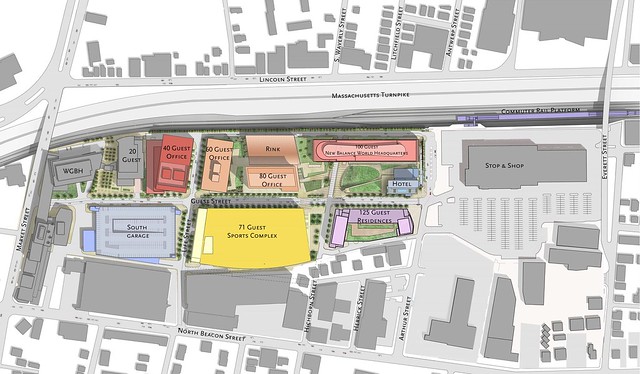 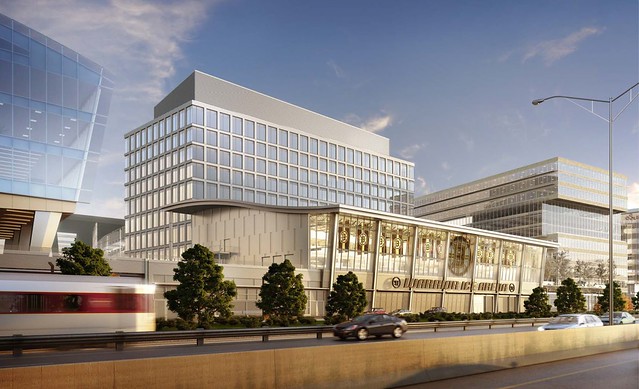 The next phases of Boston Landing will include new office, retail and residential space, as well as state-of-the-art sports facilities. The Residences at Boston Landing, a 17-story building featuring 295 modern luxury apartment residences and 16,400 square feet of retail, topped off last week, and the 160,000-square-foot Auerbach Center, which will house the Boston Celtics’ new official practice facility, will soon top off at six stories tall. Both new buildings are expected to open in mid-2018. 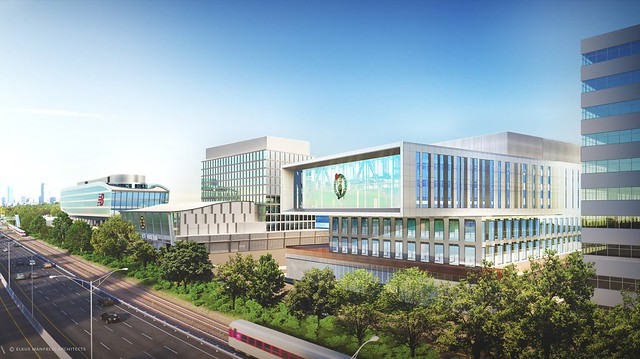 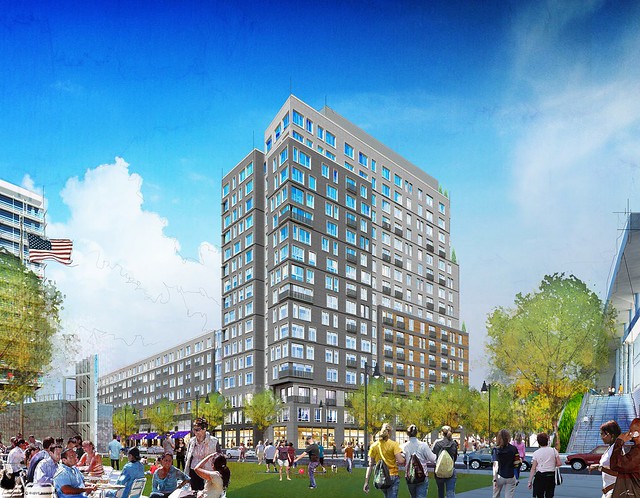 The Residences at Boston Landing.

Across from the Bruins’ and Celtics’ facilities, 71 Guest Street will provide a state-of-the-art track-and-field complex. Spanning 290,000 square feet, the building’s centerpiece will be a 200-meter hydraulically-operated running track suitable for hosting large-scale athletic events. 71 Guest Street will also include office and laboratory space, as well as ground-floor retail.

Next to New Balance’s headquarters and the commuter rail station will be the new Boston Landing Hotel, which will accommodate up to 175 hotel rooms and meeting space for large groups or events. The hotel will also house a restaurant, as well as a lounge featuring live music and a full bar for socializing and networking. 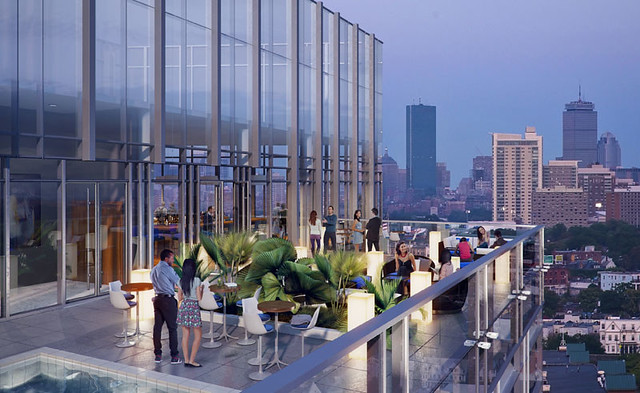 View from the rooftop bar of the future Boston Landing Hotel.

For companies hoping to become a part of Boston Landing’s burgeoning live, work and play environment, 60 Guest Street presents a unique build-to-suit opportunity. The 350,000-square-foot building will consist of brand-new office and lab space tailored to the pioneering corporate tenant. 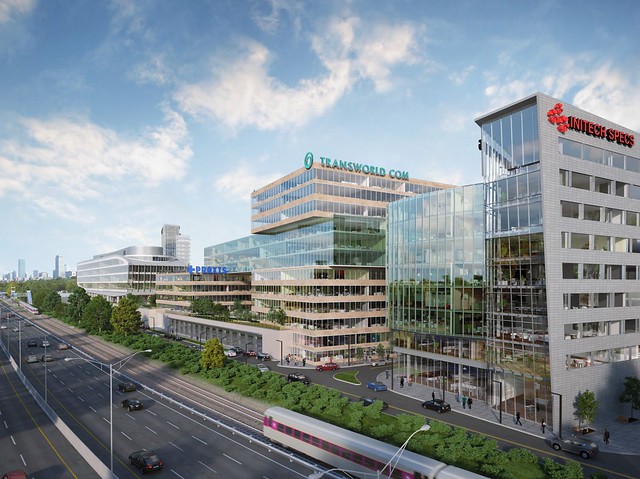 Boston Landing’s newly unparalleled access to public transit and profound real estate development success has spurred additional large-scale mixed-use development in the surrounding Brighton neighborhood. Plans call for the replacement of the existing Stop & Shop supermarket, located next to Boston Landing, with Allston Yards, a two-phased, 1.9-million-square-foot development built by Stop & Shop which would feature 1,010 residential units along with a new grocery store on the first floor, retail and Class A office space. 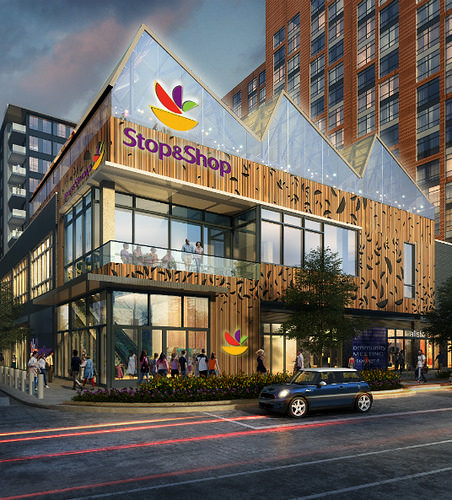 On nearby North Beacon Street, the owners of Boston Volvo Village, an automotive dealership in operation since 1957, have begun a multi-phased redevelopment of 5.3-acre dealership property. The first phase, the restoration of the historic 5-story, 71,000-square-foot office building at 61 North Beacon Street, broke ground earlier this month and will feature a new dealership and offices for Boston Volvo Village, in addition to ground-floor retail and 28,000 square feet of available office space on upper floors. Future phases call for three new buildings, which could include multifamily housing. 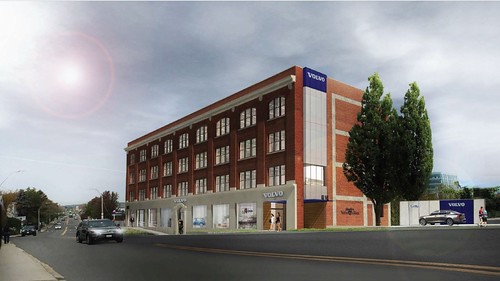