A topping off ceremony was held Monday (November 14th, 2016) for Block 6 at Assembly Row, a 20-story development with 447 residential apartments and 40,000 square feet of retail opening in Early 2018 in Somerville’s rapidly growing Assembly Row neighborhood. Representatives of the Block 6 development and construction team gathered to sign the 20-story Block 6 tower’s final steel beam then lifted the beam and connected it to the tower’s top floor.

Block 6, along with neighboring Alloy, will bring increased vitality to Assembly Row. “We are honored to play a role in the advancement of one of the region’s most exciting new neighborhoods in collaboration with such valued partners,” said Patrick Callahan, President of Block 6 General Contractor Callahan Construction Managers. Both Block 6 and Alloy are developed by Federal Realty Investment Trust. Upon completion, Assembly Row will include over 600,000 square feet of retail, 1,800 residential units and 2.8 million square feet of office space. The following are photographs from the Block 6 topping off ceremony, courtesy the Block 6 team: 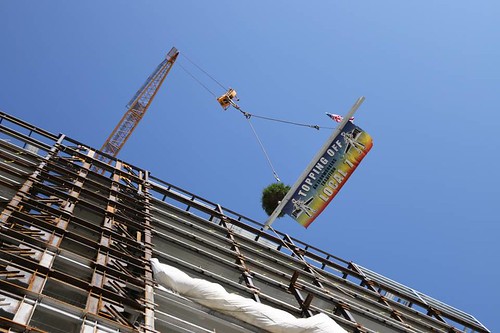