Known for creating some of the best outdoor experiences in the city, Seaport announces two of its most popular outdoor food and drink destinations will return for an extended season. The beloved Cisco Brewers Seaport Beer Garden will come back for its fourth year in a row on April 15 and Tuscan Kitchen’s 23,000 sq. ft. al fresco oasis, Il Giardino, will kick off its second season in early May. Adding to Seaport’s robust variety of outdoor patios and activations, guests can expect a mix of past offerings and exciting new enhancements for the 2021 iterations of these festive neighborhood pop-ups, including a menu by the local Rexicana Surf Cantina at Cisco Brewers. Cisco Brewers Seaport Beer Garden and Tuscan Kitchen’s Il Giardino will be located at 65 Northern Avenue (at the intersection of Seaport Boulevard and Fan Pier Boulevard).

“It wouldn’t be summer in the Seaport without Cisco Brewers and Il Giardino. These two incredibly fun and unique pop-ups instantly grew in popularity when they first debuted and guests look forward to their return each year. As we head into spring and warmer weather, we’re excited to safely welcome back two of the city’s hottest outdoor venues,” says Emily Soukas, Senior Manager, Activations & Partnerships, Seaport at WS Development.

Details on Cisco Brewers Seaport Beer Garden and Tuscan Kitchen’s Il Giardino follow below. Stay tuned for more updates on the pop-ups throughout the spring and summer. 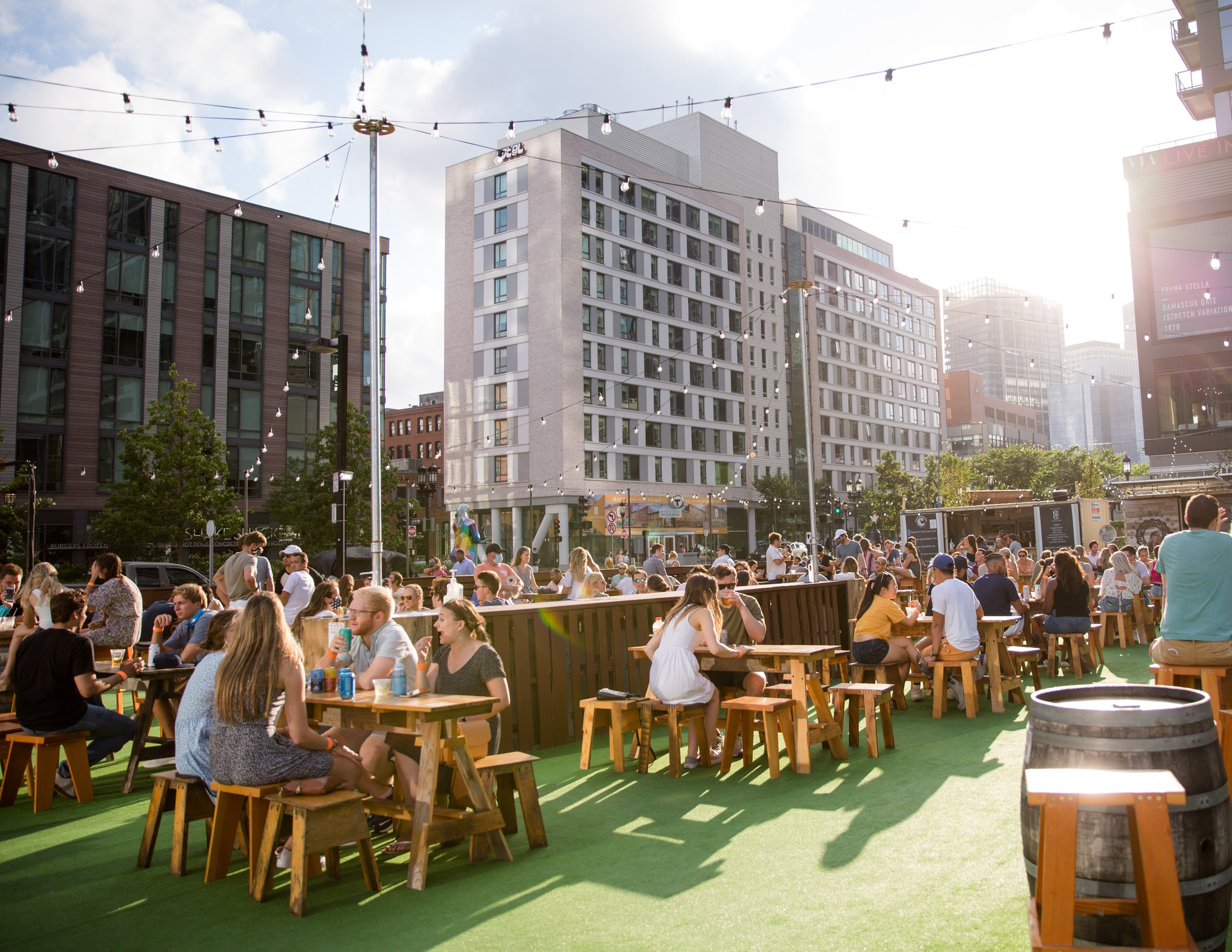 Cisco Brewers Seaport Beer Garden brings a piece of Nantucket to Boston again with its fourth season in Seaport featuring a variety of its award-winning craft beer and wine. The 14,000 sq. ft. outdoor beer garden showcases Cisco Brewers’ extensive portfolio of beers, including favorites like Whale’s Tale Pale Ale, Grey Lady Wheat Ale, Wandering Haze Hazy IPA and its seasonal Summer Rays Golden Ale, as well as hard ciders, wines, frosé and coolers. On draft throughout the summer, Cisco will be serving up a series of refreshing small batch brews, like a Mango Hazy IPA, and a Session Peach IPA – available only at the beer garden. Beginning Memorial Day Weekend, Cisco Brewers will serve its new Cisco Hard Tea.

New this year is a menu by local restaurant Rexicana Surf Cantina which will offer Caribbean and Central American influenced cuisine. Rexicana will serve up tacos, locally produced corn tortilla chips with freshly made dips like guacamole, queso and roasted chipotle salsa, as well as its Taco TotsTM made with fried potatoes, cotija, salsa, crema, and chipotle aioli with a choice of protein. Many of Rexicana’s ingredients are sourced and produced locally, such as pork and beef from New England farms, corn grown in Hadley, MA, and tortillas pressed in Plymouth, MA.

In compliance with COVID-19 cautions and regulations, Cisco Brewers will continue its tableside service model and Rexicana will provide a contactless ordering experience. Per the guidelines from the City of Boston and Commonwealth of Massachusetts, all guests purchasing alcoholic beverages are also required to purchase food when placing a beverage order.

Cisco Brewers Seaport Beer Garden is located at 65 Northern Avenue, Boston Seaport; Hours of operations will be Tuesday – Thursday 4 – 10pm; Friday 3 – 11pm; Saturday 12 – 11pm; and Sunday 12pm – 10pm. On Monday holidays, it will be open 12pm – 10pm. Additional details and updates can be found at www.bostonseaport.xyz/cisco-brewers. 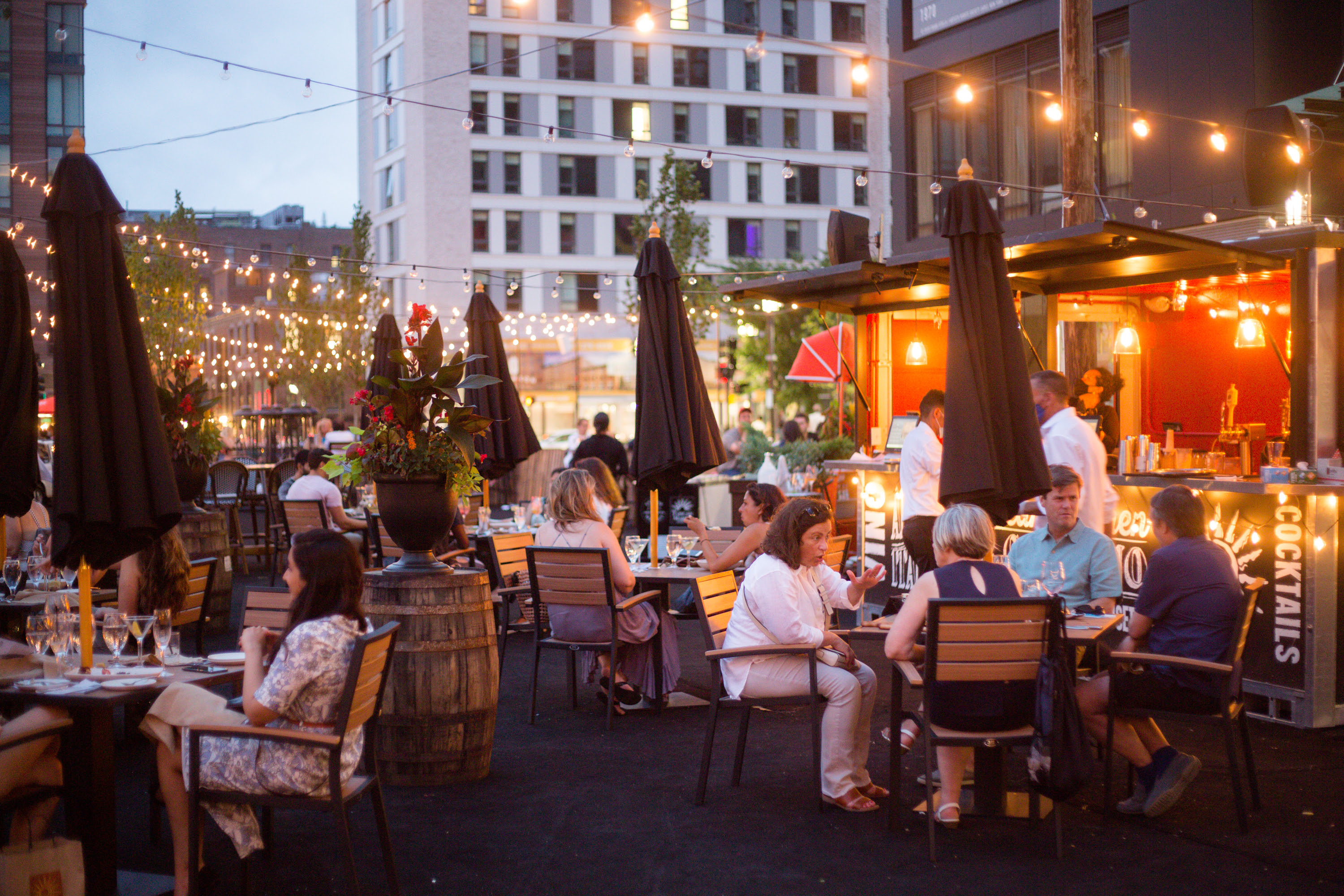 Il Giardino is Tuscan Kitchen’s outdoor dining experience and one of the most expansive, socially-distant outdoor dining spaces in the City of Boston. Spanning 23,000 sq. ft., the 2021 version of Il Giardino will bring sun-seekers a refreshed artisan Italian experience with a wide-ranging menu, raw bar, Aperol spritz cart, pizza oven, refreshing cocktails and more. Tuscan Kitchen once again partnered with WS Development, the primary developer behind the Seaport neighborhood, to bring this highly popular restaurant concept back for its second season. Decked with bistro-style lighting, intricate topiaries and colorful floral arrangements, the garden-inspired tent will include a spacious patio and lounge setups as well as a more formal dining experience with additional seating this year. The walkway at the restaurant’s entrance will have Instagram worthy moments inspired by Italy, inclusive of a light-up marquee with Italian phrases, a cutout Fiat and Vespa, and Italian monuments along with greenery and florals.

On the menu are over 30 artisan specialties from Tuscan Kitchen Seaport executive chef Nimesh Maharjan like antipasti options and fresh salads; bar crudo sea treasures including oysters, jumbo shrimp and clams; pizzes that will be fired in a custom Italy imported outdoor oven; homemade pasta creations; and entrees for carnivores and pescatarians alike. The offerings are rounded out by Tuscan’s signature handspun gelato as well as a collection of beers, wines, and summer sippers. Tuscan cocktail specialties will be full of bright, tropical flavors including tiki inspired beverages, thirst quenchers Aperol and Rosé Spritzers, and dozens of other coastal driven cocktails.

While formal reservations are not available at Il Giardino, guests will be able to join a waitlist; more information will be available at tuscanbrands.com/ilgiardino on opening day.  Reservations are available at Tuscan Kitchen’s indoor restaurant at 64 Seaport Blvd. Walk-ins at Il Giardino will be accommodated based upon availability. Il Giardino is open to all ages and in the event of rain, all seating will be beneath the tent. Tuscan Kitchen’s Il Giardino will be open Monday – Friday 4pm – 10pm, Saturday 12pm – 11pm, and Sunday, 12pm – 10pm. For more information, visit www.tuscanbrands.com.