As we enter 2021, BLDUP has compiled a list of the area’s largest approved projects covering over 32M square feet of upcoming new construction. These projects will change neighborhoods and monitoring their progress will give us an idea of how COVID-19 will continue to affect the commercial real estate market.

The 161-acre site located off McClellan Highway in East Boston and Revere was purchased for $155 million in 2017 by the HYM Investment Group who won approval for Boston’s largest development project ever in September of 2020. The 16.2M square feet of development will include 10,000 residential units along with retail, offices, research, and hotel space. Site work is already underway on the Revere side of the project with 3 buildings, 2 mixed-use, and 1 hotel, having also completed site plan approval. 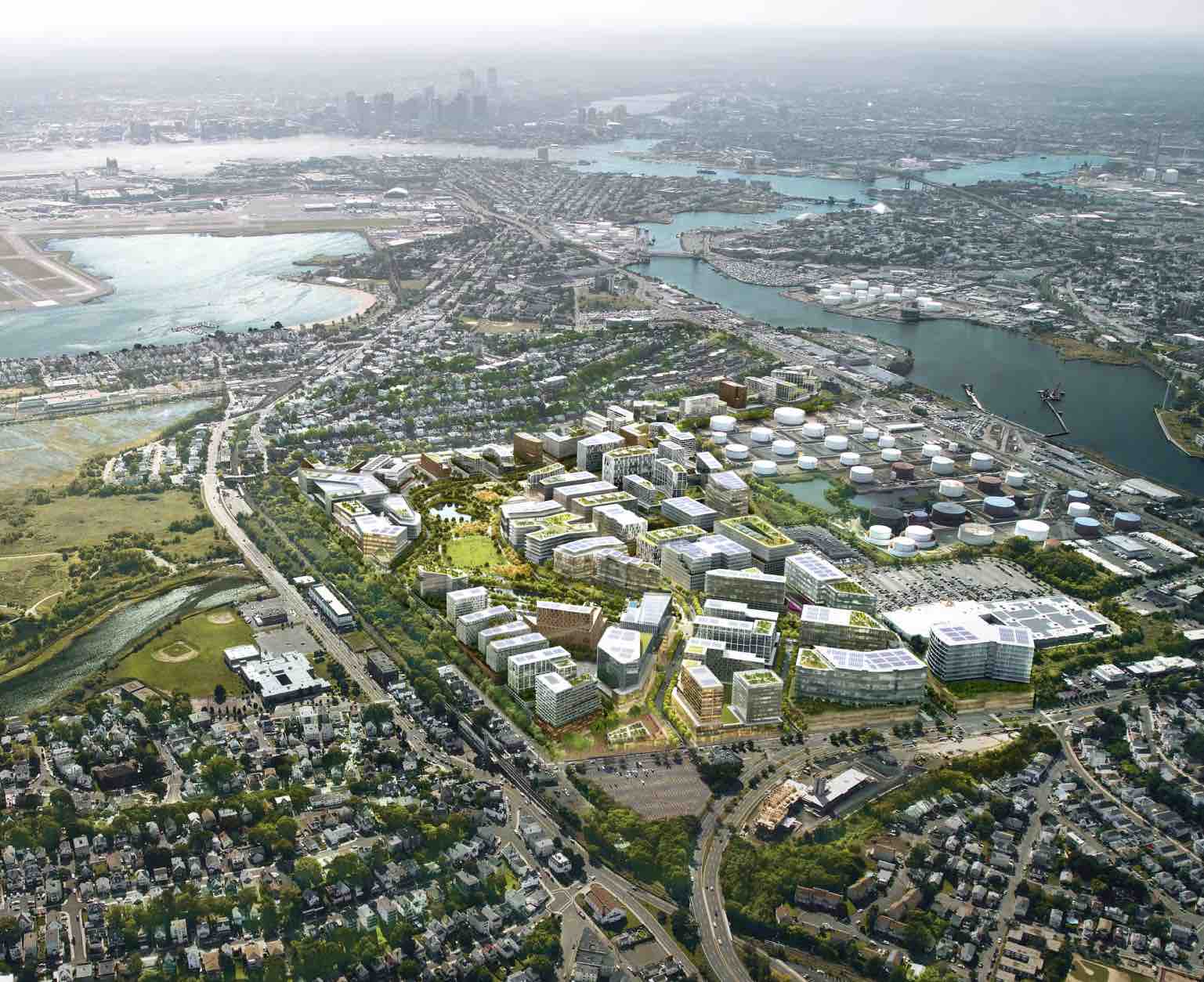 A transformational air rights development in Back Bay that will be constructed above the existing Back Bay Station, Boston Properties will construct four towers with approximately 1.37 million square feet of residential, office, and public space. 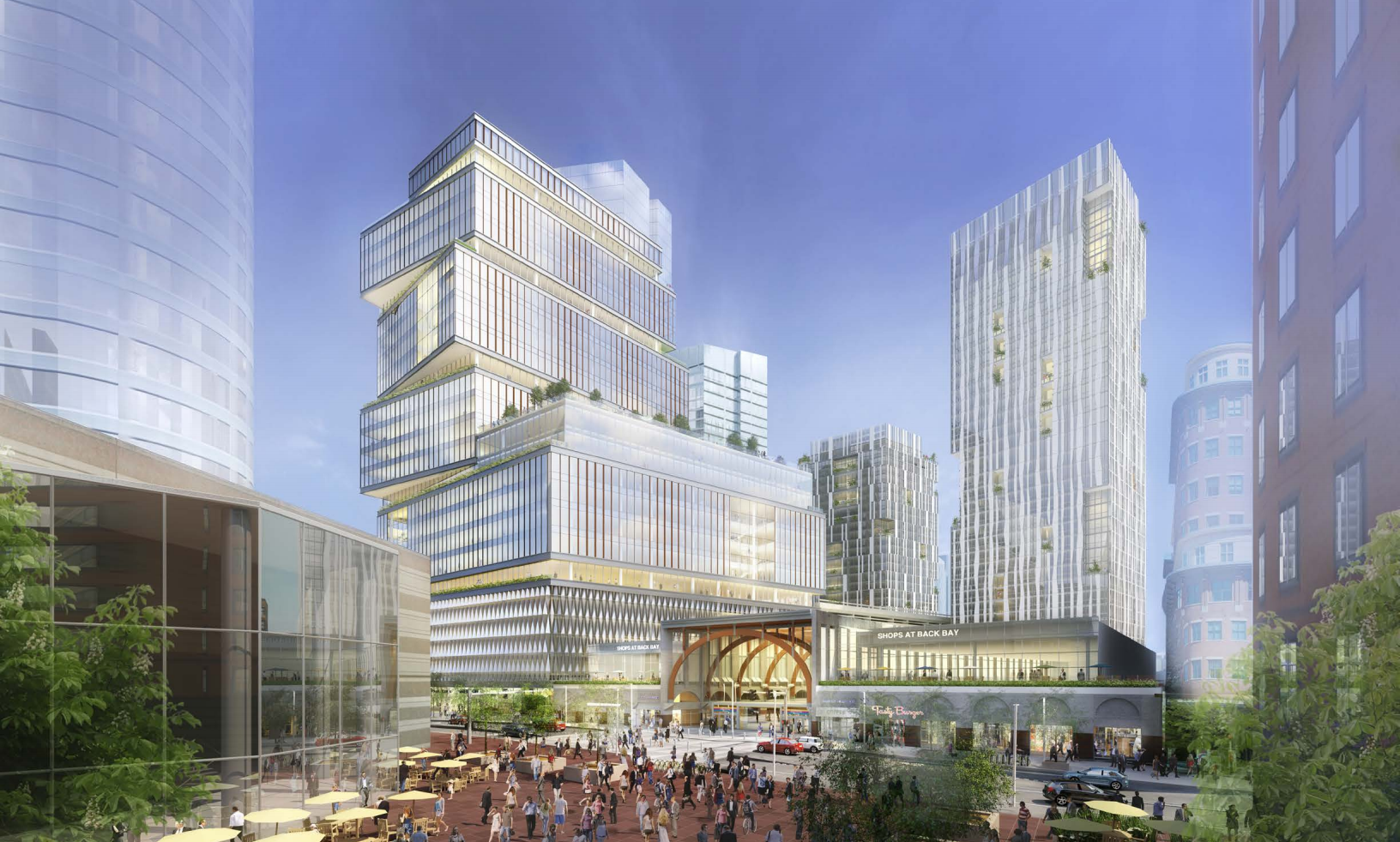 An upcoming redevelopment of five acres in South Boston’s Andrew Square, DJ Properties and Samuels & Associates plan to construct eight buildings housing 656 units, with 98,600 square feet of retail space and parking for 560 cars. In January of 2020, a notice of project change calling for an additional 90 units and 15 parking spaces with a reduction of 16,600 SF retail space was approved by the BPDA.

Spearheaded by Boston Global Investors, the proposed 250-foot Class-A R&D office building was approved by the BPDA in October of 2020. The 518,000 square foot project will include a great hall at the base of the building along with two floors of programmable public space connecting two levels of the Seaport. Boston Global Investors expects construction to begin as early as summer of 2021. 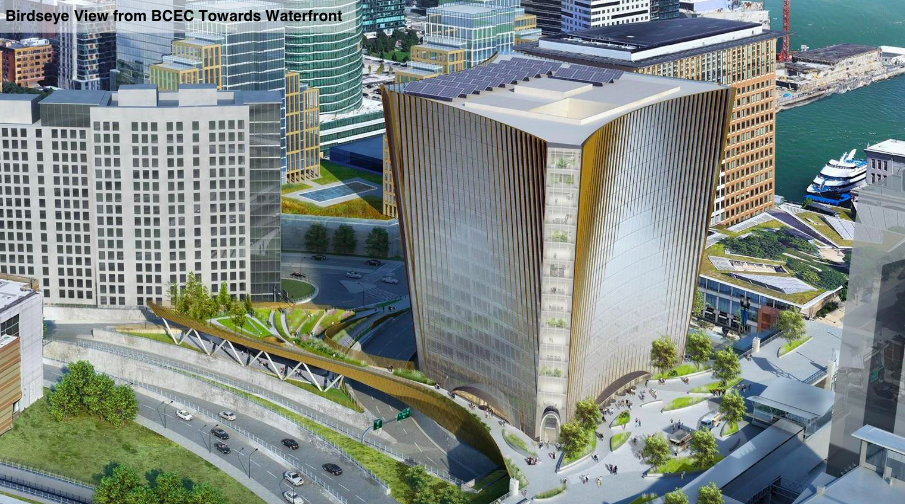 Xmbly will bring another 1.6 million SF of development to Somerville’s Assembly Row. On June 10, 2020, BioMed Realty announced a definitive agreement with Cresset Development and Novaya Real Estate Ventures to acquire the XMBLY Campus, comprising one existing office building totaling approximately 162,000 square feet and 7.5 acres of adjacent land for future development. In July, updated plans for the site were approved by the Somerville Planning board calling for a total of 1,220,000 square feet of office/lab/R+D space.

“Our vision for building commercial lab and office space in Assembly Square will add significant momentum to Somerville’s growing innovation ecosystem,” said Maria Huntalas, senior director of corporate communications and marketing at BioMed Realty. “Along with the potential to create over 4,000 construction and permanent jobs, the proposed project will create a springboard for life science and technology companies to operate and grow in Somerville.”

The multi-phased, 1.23 million square-foot Allston Yards project has been years in the making and is the result of a partnership between Stop & Shop, The Bozzuto Group, Southside Investment Partnership, and New England Development. Approved in 2019, a total of four buildings are proposed, ranging from 14 to 20 stories and 200 to 235 feet in height, featuring up to 868 apartment and condominium residences, 352,000 square feet of Class-A office/research space, 50,000 square feet of restaurant/retail space, a new 67,000-square-foot flagship, state-of-the-art Stop & Shop supermarket and up to 1,300 parking spaces. Construction is expected to kick off in 2021. 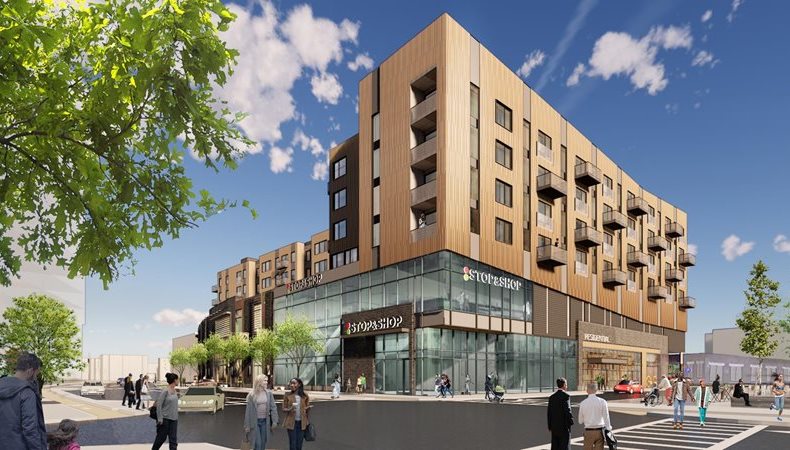 Situated across 15.7-acres in Somerville’s Union Square, the 2.4 million square foot USQ project will feature a mix of uses including biotech, lab, office, residential and retail space. The project will comprise 60 percent commercial and 40 residential development and includes over 3.5 acres of open space. The upcoming Green Line extension to Union Square will directly link the site to Downtown Boston. Leasing is underway for the first building in the project, 10 Prospect Street, a 7-story, nearly 200,000 square foot R&D building. 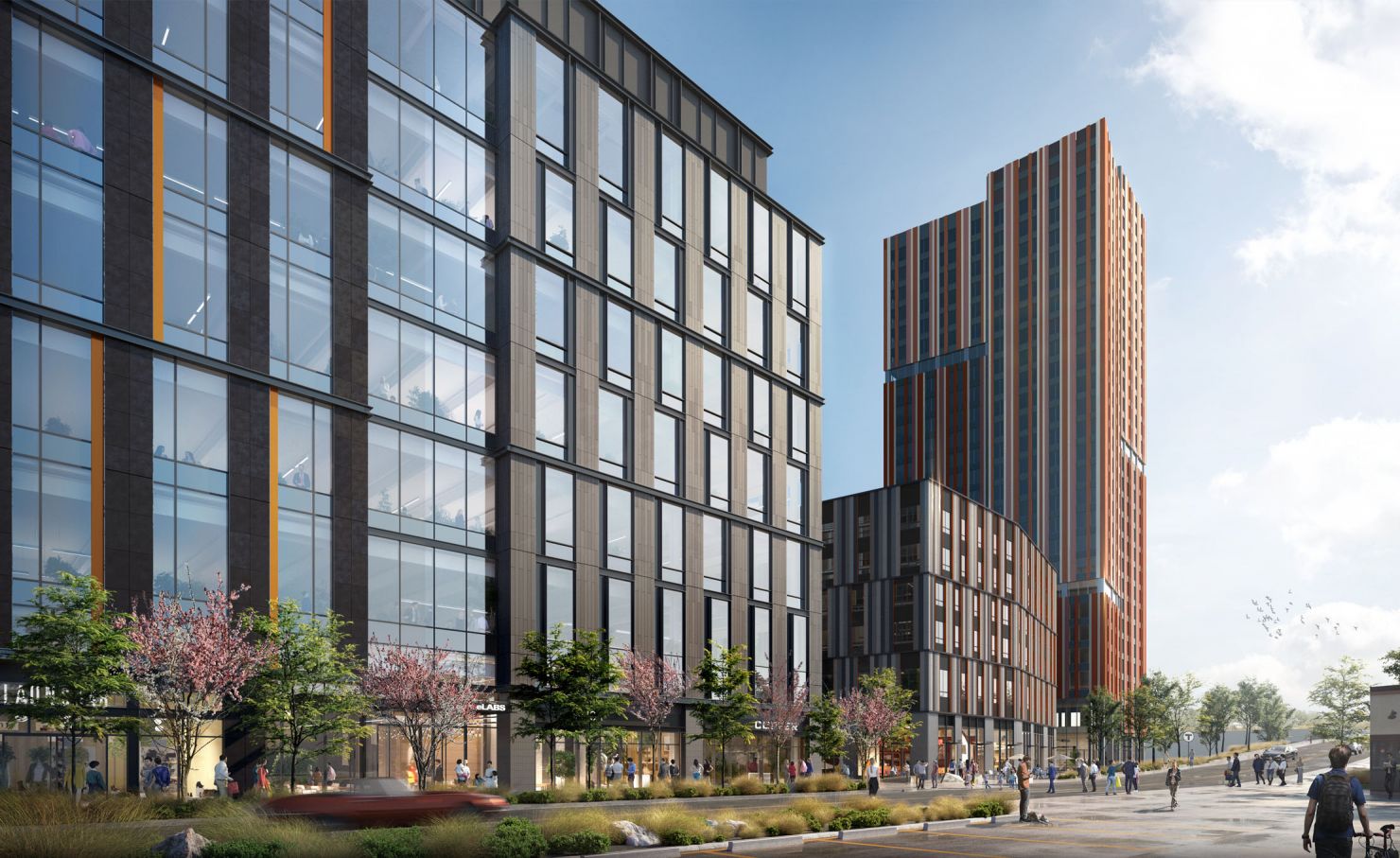 An upcoming 22.6 acre development that would transform Needham Street in Newton with new residential, office, and retail space, Northland’s development will create up to 800 residential units, 180,000 square feet of office space, and 115,000 square feet of retail space, replacing existing surface parking lots, retail strips and industrial buildings. The project was approved in March of 2020 with tenants vacating existing buildings on the site in late 2020. 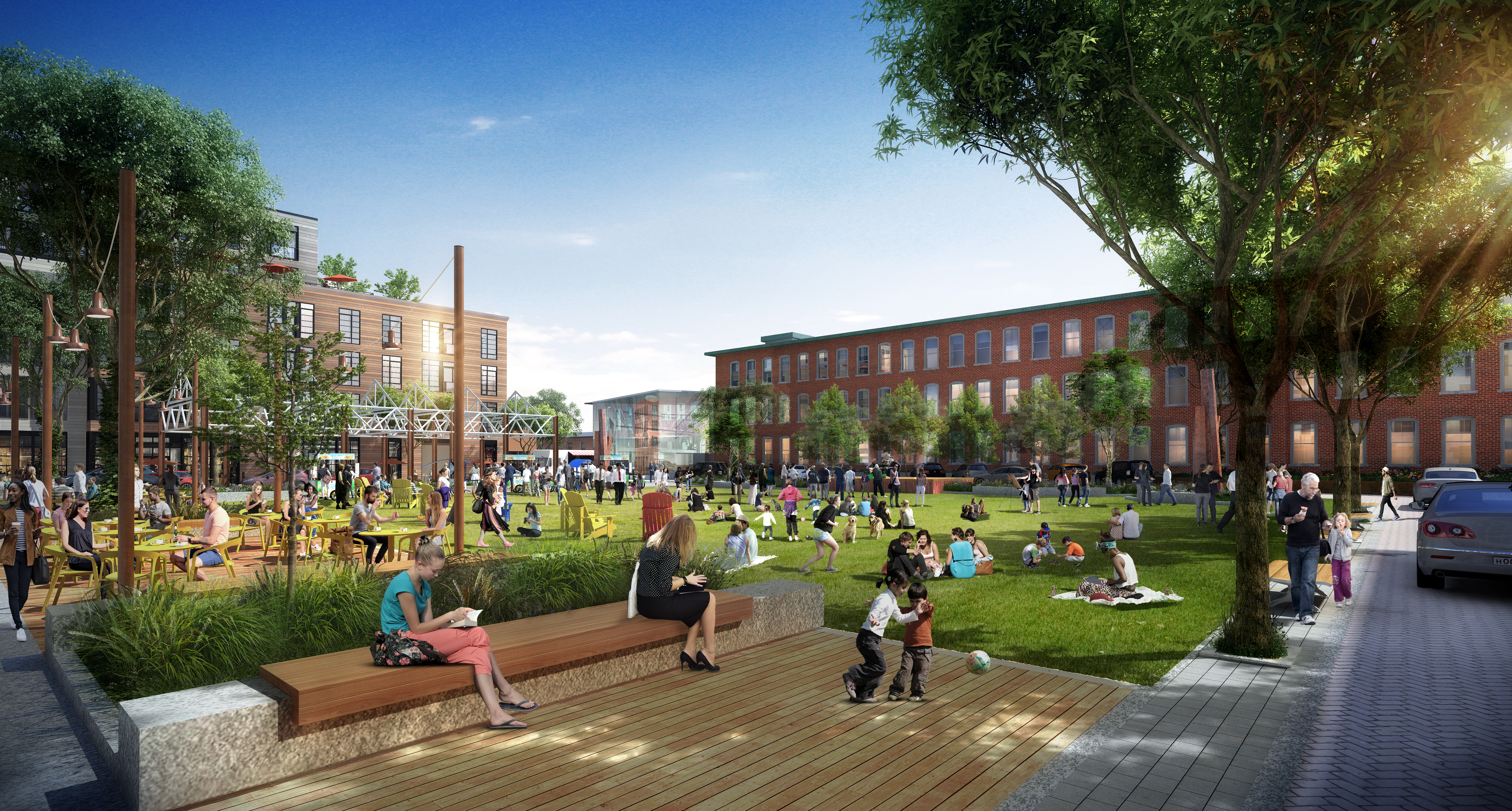 A transformational project that would online 150 hotel rooms, 253,827 SF of office space, 38,895 SF of retail, and 582 apartments, Newton City Council approved the development located on land around the MBTA’s Riverside station. The 10-building proposal is expected to generate more than $1.5M in revenue for the City of Newton and is the culmination of Mark Development and Normandy Real Estate Partners. 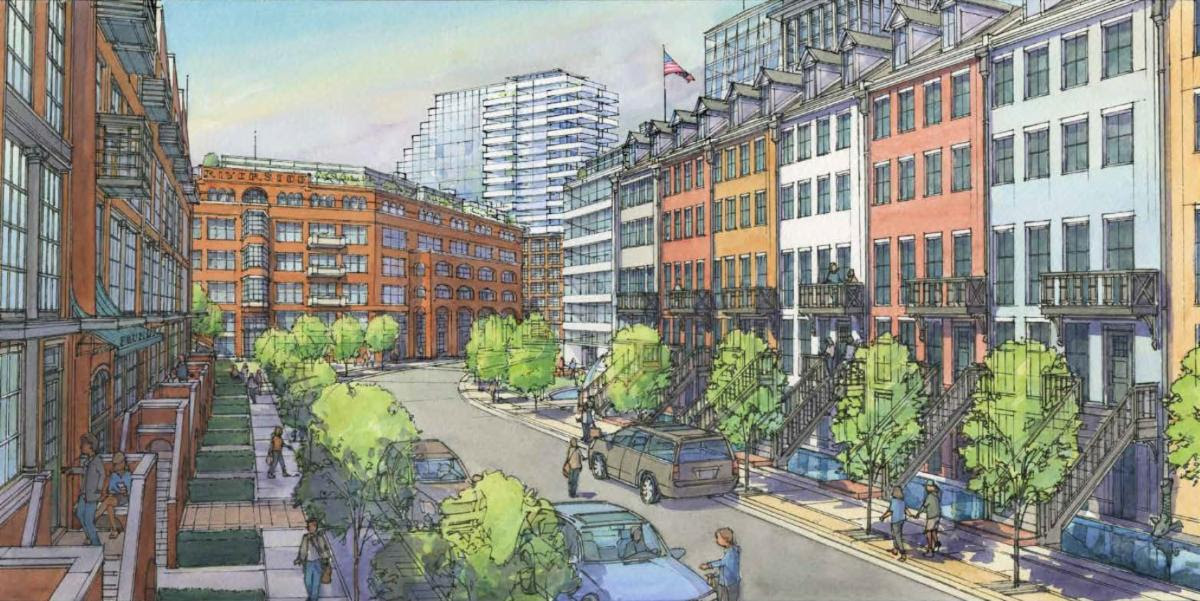 An approved 2-building, 6-story mixed-use project, this Everett development will include 650 residential units along with 9,000 square feet of ground-floor retail space. Developed by Greystar, plans also include 12,500 square feet of amenity spaces and 785 parking spaces. The project was originally approved in April 2019, with Greystar winning additional approval for updates to the project in July of 2020. 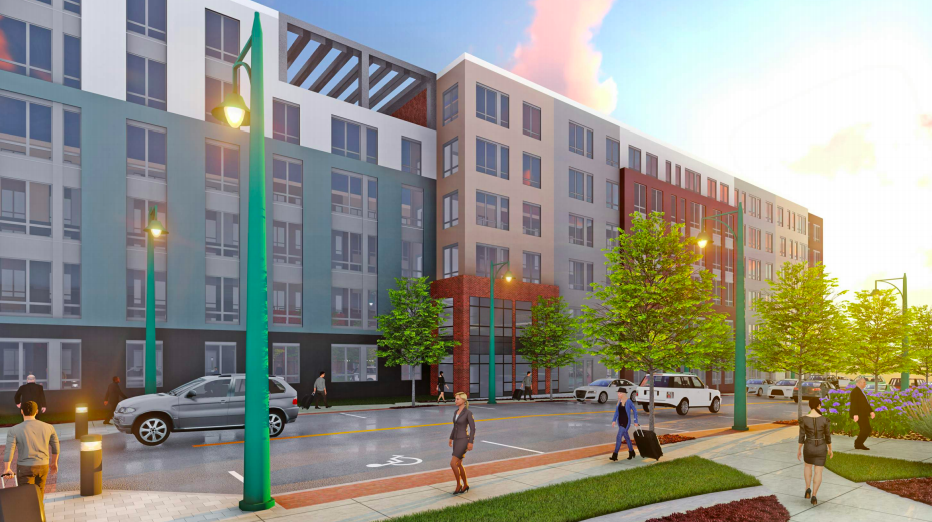 Developed by Lennar Corporation, the 396 unit multifamily project that will replace a blighted and underutilized property, which held freight containers, was approved by the Everett Zoning Board on June 17, 2020. The new state of the art building will consist of 81 studios, 181 one-bedrooms, and 134 two-bedrooms and will also have amenities such as an outdoor pool area, cyberdeck, and pocket park. 59 residences will be designated affordable. 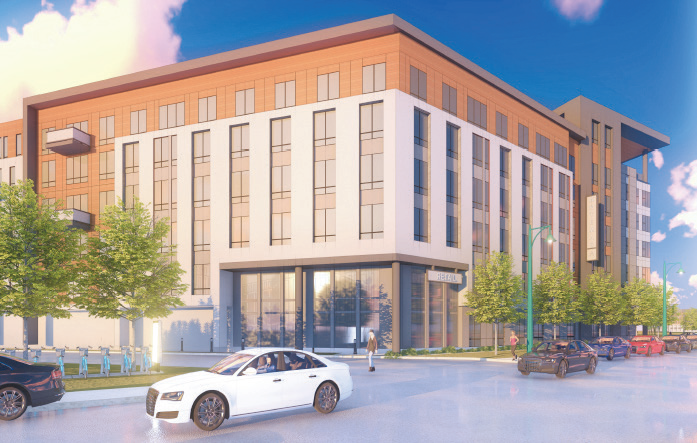 Approved by the Somerville Zoning Board in October of 2020, The new Clarendon Hill housing development will replace 216 existing public housing units with a newly constructed development consisting of 591 rental units within 4 buildings and 34 townhomes. Parking for the project will be provided in a combination of below-grade and on-street parking, a total of 369 spaces. A new public park will also be created as part of the development. 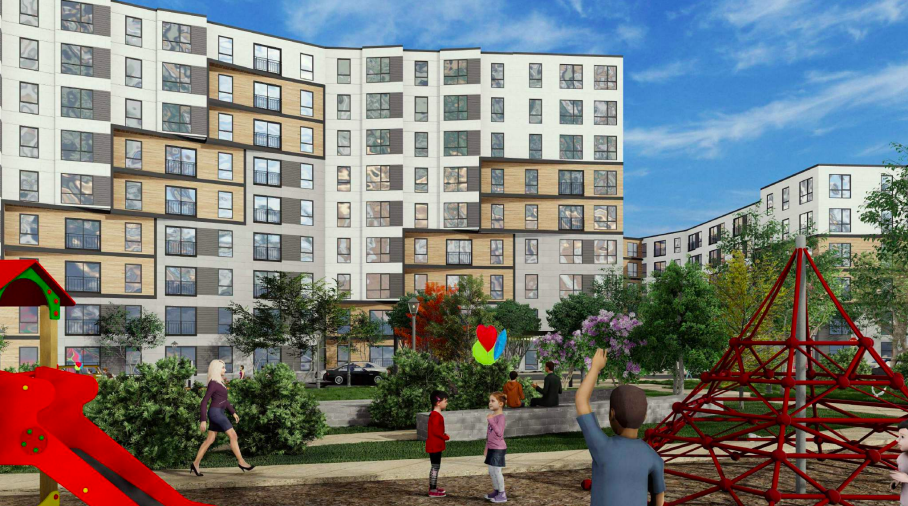 Cabot, Cabot & Forbes (CCF), and CIM Group have won approval for a 426,500 square-foot mixed-use development project featuring 435 residential units and ground-floor retail across the parcels. Approximately 150 parking spaces would be located on-site both at and below grade. 37 units within the project will be income-restricted. The project was approved by the BPDA in January 2019. 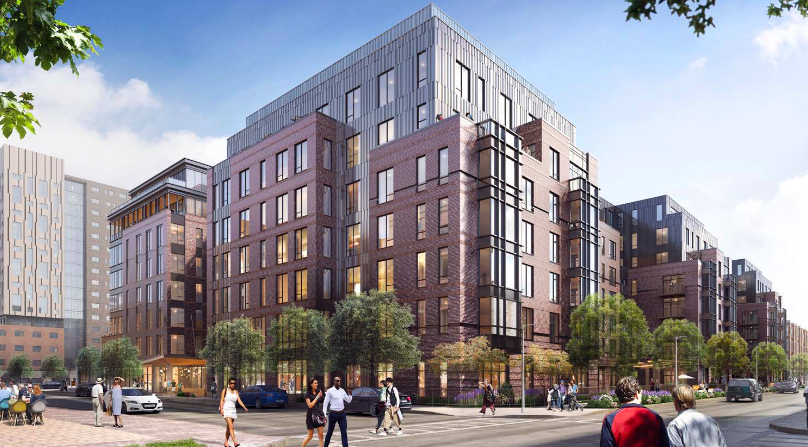 Originally a built-to-spec headquarters for General Electric, 15 Necco has gone through design iteration changes since GE announced its purchase of the site in 2016 through the company selling the renovated asset in 2019. In September of 2020, the BPDA approved the current project, featuring 316,000 square-feet of office/life sciences/research and development space with active ground floor uses including a community touchdown space.

Developers Morningside Group and Samuels & Associates have partnered to redevelop a collection of vacant parcels located at the juncture of Dorchester's Savin Hill, Jones Hill, and Meeting House Hill neighborhoods. In total, approximately 488 residential units will be built at DotBlock, a mix of apartments and condos, across five mixed-use buildings. An NPC was approved for the project in 2019 and on December 17th, 2020, the first construction permits valued at $153,000,000 were issued to the project. 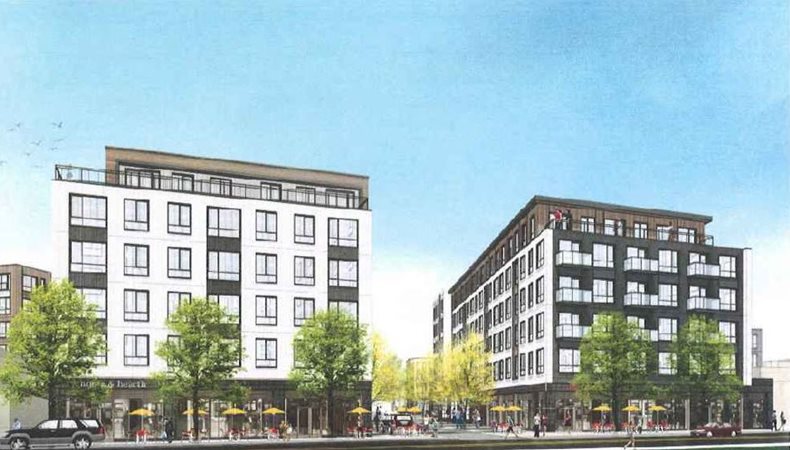 A 420,000 square foot Art Deco-style parking garage completed in 1927, the Motor Mart Garage stands on a 1.2-acre parcel and features a total of 1,037 parking spaces in addition to 50,000 square feet of ground-floor retail space. New project plans released in September 2018, spearheaded by CIM Group, call for the redevelopment of the existing building, and the construction of a 28-story residential tower rising out of the garage. The western portion of the existing parking garage will be converted into approximately 84 new residential units. The new residential tower will rise out of the eighth floor of the existing building and contain around 231 condo units. The project was approved by the BPDA in October of 2019. 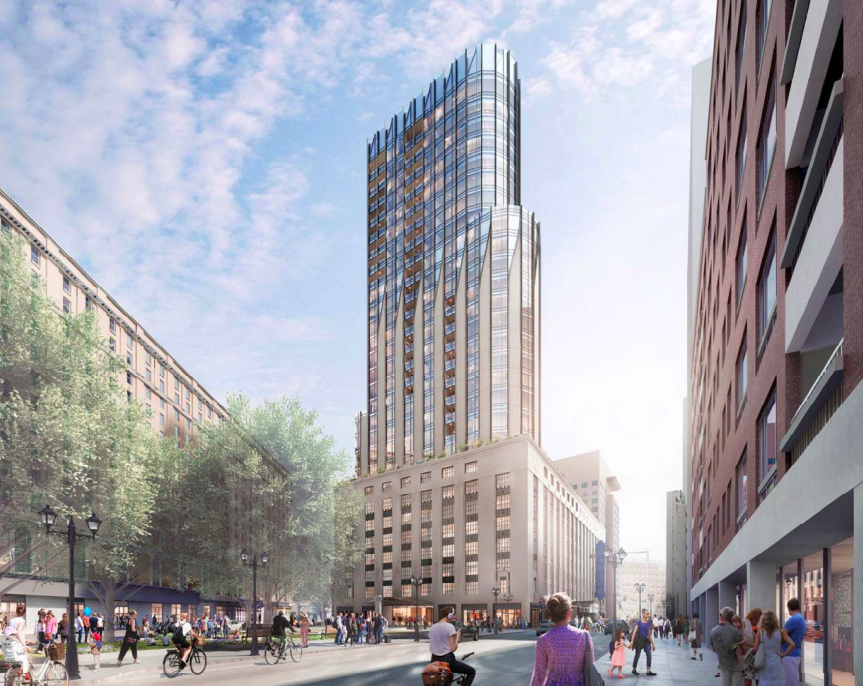 An approved 34-story residential building in the heart of Kendall Square, the existing Blue Garage will be redeveloped to include 425 residential units. The Garage South development will include 355 apartments and be the first phase of the development. The Garage North will include 70 units plus 1,300 square feet of retail space. 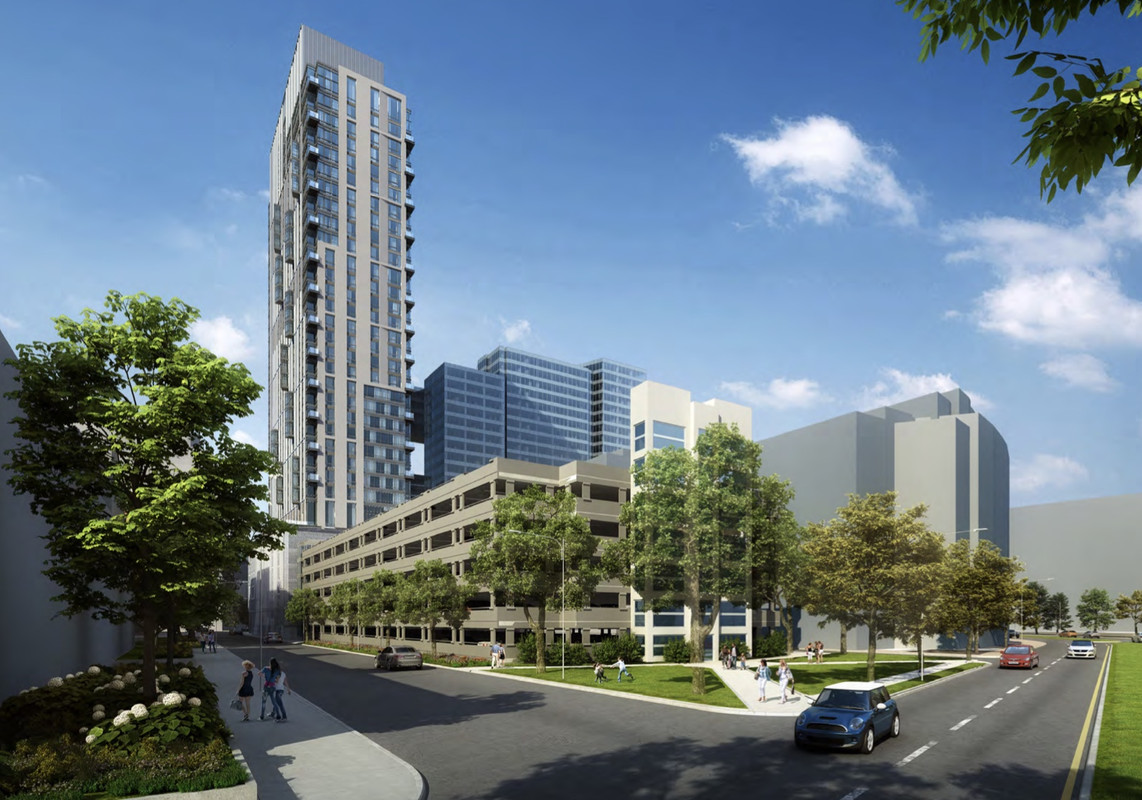 In July of 2020, Mark Development won approval for a mixed-use 40B project on 2.98 acres of land on Washington Street, Dunstan Street, and Kempton Place in West Newton. The project will consist of three separate buildings with a total of 234 units of rental housing and 8,500 square feet of ground-floor retail space facing Washington Street. As part of the development, an existing 8,222 square foot office building will be maintained on the site. In December, the developer secured a loan worth $18,480,000 from Brookline Bank for the project. 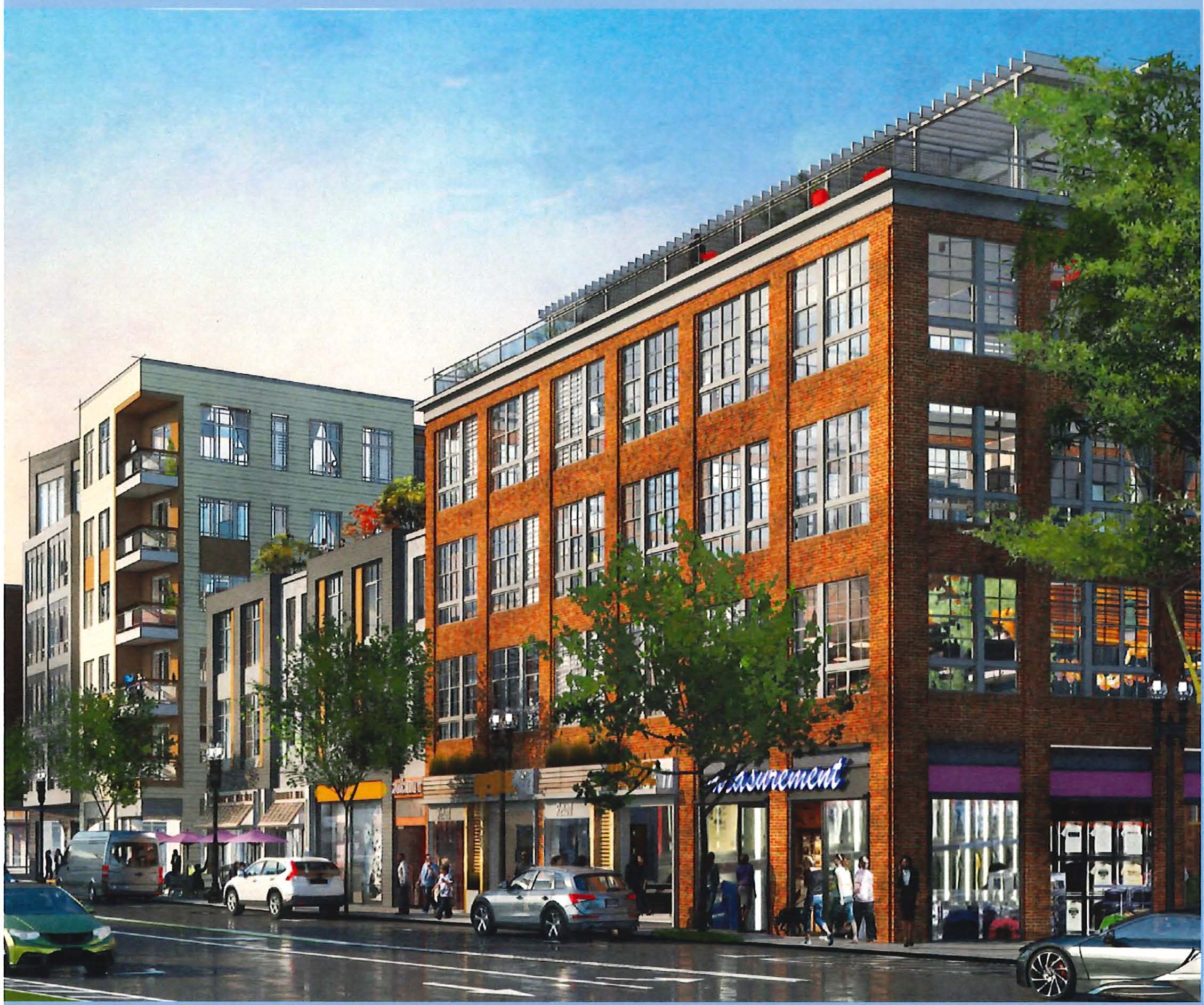 Developed by WS Development, the Fort Point project, approved in November, calls for 38,000 square feet of retail and approximately 384,000 square feet of office use. The building is proposed with a richly textured brick masonry façade and brick arch-top windows that present a contemporary interpretation of Fort Point’s industrial heritage and tradition of craftsmanship in the application of brick masonry. BPDA approved the project in November of 2019. 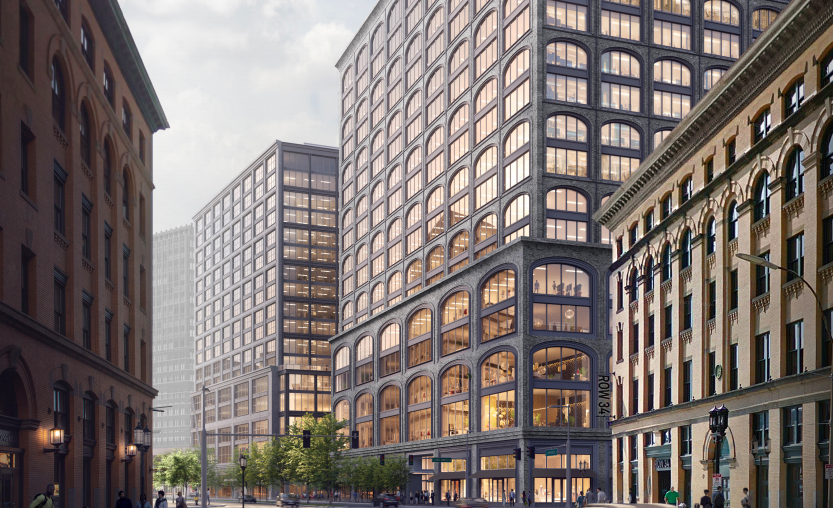 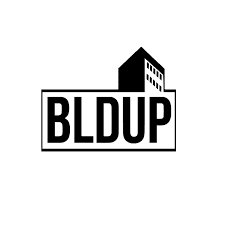